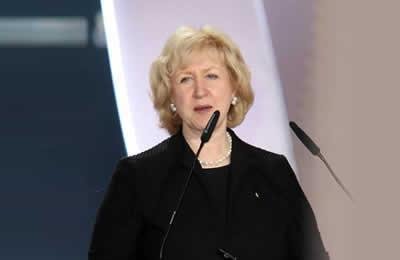 Acclaimed female politicians and activists from around the globe attending the 100,000-strong annual Iran Freedom rally in Paris on Saturday paid tribute to the role top opposition leader Maryam Rajavi and the NCRI have played in standing up for women’s rights in Iran.

To loud cheers, Mrs Fernandez de la Vega said one of the “biggest joys” of her long and successful political career had been watching a “powerful woman lead the NCRI”.

She added: “I can see with my own eyes that equality is the first line of action in this organization.

“We support you and your movement because like you, we are convinced that without equality there would be no justice.”

Mrs Fernandez de la Vega went on to congratulate the NCRI and Iranian people on their “struggle”, adding it was a “battle” they must now win.

In an impassioned speech which gained long applause from the huge audience in Villepinte, Ingrid Betancourt, a former presidential candidate who arguably found greater fame after being taken hostage by Columbian rebels, hit out at the mullahs for “enslaving” the women of Iran.

Ms Betancourt concluded her speech by congratulating the main Iranian opposition group PMOI (MEK) on its 50th anniversary, before adding, while pumping her first in the air: “Yes to supporting an opposition for democratic change in Iran.”

After being welcomed by the large Canadian contingent in the arena audience, former Canadian PM Kim Campbell said it was time the “tyranny” of the ruling regime in Tehran was replaced by the “gift of democracy”.

She added with pride that every political party in Canada had expressed its support for a free and democratic Iran.

“Democracy in Iran would be a great gift, not just to the Iranians themselves but to all the world.

“I can assure you that Canadians will rejoice with all of you when that day comes.”

Some of the most sustained applause of the rally was reserved for Elaine Chao, former US Secretary of Labor.

After backing the NCRI’s call for equal rights for women, a fundamental part of Mrs Maryam Rajavi’s 10-point plan, she spoke emotively and directly to the women secretly watching the live broadcast of the rally from Iran.

She said: “While other countries are empowering women, Iran has been penalizing women. Seventy-seven fields of study are prohibited for women.

“To Iranian women: we see you, we hear you – you are not forgotten. No regime, however repressive or brutal, can stand against fundamental reforms forever.”

Egypt’s Hoda Badran, chair of the Network of Arab Women, echoed Mrs Chao when she took the stage, reassuring the watching audience that the mullahs could not cling on to power indefinitely.

She claimed they were simply not “trustworthy”, adding: “I know very well it is impossible for this regime to stay in power. Such regimes ruling in the name of Islam do not represent the people.

“We should continue the fight against extremism. We seek a non-nuclear Middle East.”

Gissoo Shakeri, an Iranian dissident singer, writer and women’s rights activist, captured the mood perfectly when she later performed a classical Iranian song that spoke to the millions of women around the world yearning for regime change in Iran.