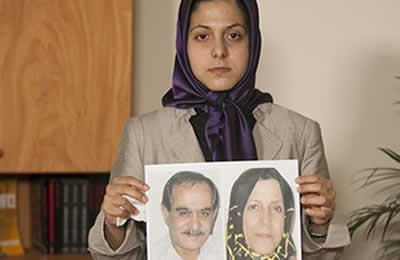 Shaqayeq Azimi is an aspiring, joyful girl of 22 with a full life ahead of her. She is also an Iranian dissident, committed to challenging the repressive theocracy that rules her home country.

Recently she learned that both her father Mahmoud and her mother Fatemeh Ziae were arrested on October 11 by the Iranian secret police in a raid on their home in Tehran. The regime has been characteristically secretive about the arrests, so Shaqayeq has been unable to obtain any information about where her parents have been taken, or what their current condition is.

This is not the first time that her parents have been arrested, but given the nature of the regime, each such incident poses grave dangers.

Fatemeh endured five years’ imprisonment and torture in the 1980s for supporting the principal Iranian opposition movement, the People’s Mojahedin Organization of Iran (PMOI/MEK). She was arrested again in February 2009 for visiting her relatives in Camp Ashraf, then the place of residence for thousands of Iranian dissidents in Iraq. This so-called crime landed her in jail for two years, where poor conditions and mistreatment contributed to acute health afflictions. She was arrested for yet a third time in June 2013, again on political charges.

Shaqayeq’s father was a political prisoner during the Shah’s regime and has been arrested several times since the 1980s including in 2011 and 2013 for supporting the MEK.

A number of other MEK activists have been reported to be arrested in Tehran in recent days.

The MEK has always been a target of particularly frequent and particularly ruthless repression by the Iranian regime. Some 120,000 members of the group have been executed, and many more have been arrested. Yet the opposition has shown surprising resilience and has maintained an extensive and growing network of activists inside Iran.

Following the news of their parents’ arrests, Shaqayeq and her sister Niloufar have been writing to the UN High Commissioner for Human Rights; to Ahmed Shaheed, the UN Special Rapporteur on the situation of human rights in Iran; and to the US State Department, urging each of them to intervene on behalf of their parents.

Civil activists were not allowed to visit Narges Mohammadi in hospital