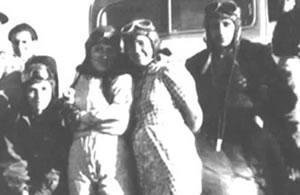 in various periods of time by challenging impeding traditions, breaking taboos and rebelling against subjugating elements.

Being a pilot was for males and nobody thought women could do anything in this field. However, this arena was conquered by brave and daring women who were not satisfied with their status-quo and wanted to write their own future.

The first commercial calling on applicants to register for pilot training courses appeared in the daily newspapers on November 7, 1939.

630 young men and women (mostly men) enrolled in the course, and the club began its work amid great enthusiasm.

Twenty-two women enrolled for the first semester of the Flying Club. After passing various stages, three women received licenses to attend the course.

The three women and other students admitted for the course were transferred to Doshan Tappeh..

In a glorious ceremony, each student was granted a set of flying suit, a jacket, a helmet and a gaggle as well as a parachute and a wireless radio for the students to keep contact with their instructor.

Effat Tejaratchi, Ina Avshid and Sediqeh Dowlatshahi were the first women who dared to step forward and prove that everything could be achieved if we want.

She flew round the airport and landed back in her place successfully.

She was still learning to dive and do other acrobatic maneuvering, when the club was closed down due to political turmoil in the country in the following September. In her middle age, she wrote poems and published them in a book in 1958.

After passing six months of theoretical studies, she made her first training flight in Doshan Tappeh Airport.

With the start of the World War II, the Flight Club was shut down and Ina’s training was left incomplete.
In April 1942, the Club started its activities again and Miss Avshid also resumed her training.

In September 19, 1943, after completing her training flights and scientific courses, she and 21 other students received their pilot’s licenses.

Miss Ina Avshid is the first Iranian woman who was hired by the Airways Company in 1946 and made her first flight as assistant pilot in a DC3 plane.

Shortly after, she quit this profession due to unknown reasons.

We pay tribute to these pioneering women who opened the way for all women.

Iran: Less than 2% of women’s participation in administrative positions