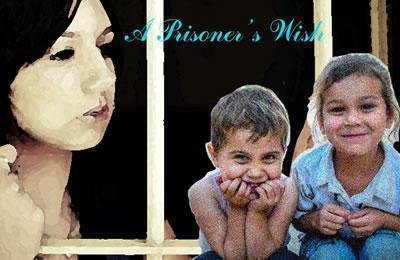 Her name was Ashraf Fadaii. She was born in 1960. Her sentence had ended in 1986, but the authorities were still keeping her in prison.

Her pretty face was a heavenly gate to her beautiful soul. She was a comrade and a lovely friend. I was her cellmate in 1982, in the ward 8 of Ghezel-Hesar prison (Karaj). Towards the end of that year she was transferred to solitary confinement in Gohardasht prison in Karaj.

Ashraf was a frequent of solitary confinement cells. She had the nick name “gypsy”, because of her agility and quickness. Like a gypsy, she was quick and had a great voice. Whenever Ashraf was kept in a solitary cell, she made sure to have a network system to keep all the cells informed of the news and incidents. She would invent a variety of ways to send every single piece of news and information to everyone. In the ward, she would Morse by knocking on the wall, clapping, throwing a slipper, sending shadows using her hand or a mirror. She would move messages through the vent or by putting notes in the restroom or by whistling.  No one could match her speed in using the Morse code. The women guards in the prison envied her for all her attributes and above all her well-above-average intellect.

In 1988, I was in a hunger strike with Ashraf and 18 other PMOI women. As a result, I was transferred to a cell next to Ashraf. One day, I used the Morse code to call her to come close to the cell wall: “Gypsy, come over, I need to talk”.  We talked about various things and then I asked her: “Imagine your prison time is over and you are freed. What would you do?”

Ashraf paused a bit and then said: “They won’t let me go. But if they do one day, we should all join the National Liberation Army. This is our responsibility. If I did not have this responsibility, I would have really loved to open a salon, a beauty parlor. It should be in the poor districts of southern Tehran for schoolchildren. Everyday little girls would come to my beauty parlor. I would comb their hair, put a beautiful bow on their hair and would send them to school all clean and nice.  I would comb the hair of little boys, put a bow on their collar, put some money in their pockets and would send them to school!”

She told me all her wishes in Morse code by knocking on the wall. Afterwards, we were both sitting in silence. I could imagine how she leaned her head to the wall, thinking about that shiny future. On this side of the wall, I envied her kindness and the beauty of her spirit.

We were transferred to the general ward from the solitary cells at the beginning of 1987.

In 1988, with direct order from Khomeini, the authorities started the massacre of political prisoners and specifically PMOI members and supporters. Every political prisoner went through a second trial and anyone still opposing the regime would be executed. Eventually more than 30,000 prisoners were executed in the summer of 1988.

Ashraf was among the first series who went to those mock trials. I saw her last, waiting behind the door of a revolutionary court in prison.  I was sitting blindfolded behind the door of one of the courts, waiting to be called in, when suddenly the door was opened and a woman was pushed out among yells and kicks. When she hit the ground, I could recognize Ashraf, looking from under my blindfold. This was the last time I saw her.

During one of our last days in the solitary cells in 1987, I asked Ashraf: “What do you think they will do to us?” She replied: “I think they will kill us all. If they do that we will not be the losers. It will be the regime. Its murderous face will be exposed to the whole world.”

Ashraf was executed in the massacre of political prisoners in 1988. She had promised to herself and to God, to fight for freedom and for equality. Ashraf, the gypsy, was slain, but the wish that was typed on that cell wall with her Morse codes, was not only inscribed on that cell wall, but it is also carved in my heart forever.

I have promised myself to open several salons for children all over Iran, and name them “Gypsy’s Children Salon”, after Iran is freed from the mullahs’ regime. I would coif all poor children for free. All the orphans, homeless children, labor children, …they would all get free service everyday to go to their schools, study, and live a happy childhood.

One day we will fill Iran with “Gypsy Salons”!