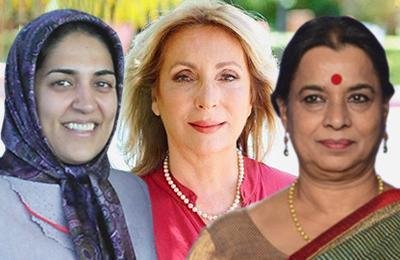 There is no going back in history, Iranian women will succeed!

The Women’s Committee of the National Council of Resistance of Iran had an online conference Friday evening, May 13, 2016.

The committee’s Elham Zanjani hosted Dr. Ranjana Kumari, director of the Center of Social Research, from India and author of nine books on women’s rights especially on violence against women, and Ms. Diana Culi, former Member of Parliament and President of Women’s Forum in Albania, writer and journalist with a focus on women.

The panel focused on the plight of women in Iran and women’s rights in tomorrow’s free Iran as outlined in the ten-point plan of the Iranian Resistance’s President-elect Maryam Rajavi.

The conference initially discussed the early days when the Khomeini regime took power in Iran, stripping women of their rights and imposing the compulsory veil and dress code and excluding them from offices and work places, particularly in the Iranian judiciary. It was also pointed out that Tehran has not signed the CEDAW because it contradicts the country’s laws on countless instances and because misogyny is institutionalized in the regime’s laws.

Ms. Culi noted at this point that the first thing every dictatorial regime does is to oppress women and there is a long history of such discrimination. So, it was a major achievement for the world in 1995, to come up with the Convention on the Elimination of All forms of Discrimination Against Women (CEDAW) which is a very important instrument for countries that really want to be democratic. It was in the World Conference in Beijing in 1995 that it was officially declared for the first time that women’s rights are human rights.

Ms. Culi also reiterated in this context that Iranian women’s struggle for social and human rights against a regime that has not signed the CEDAW is extremely important, as the world is moving towards 50-50 participation of women in all realms.

Dr. Kumari added: Unless women’s democratic rights are guaranteed by the Constitution, women cannot achieve their equal rights. The problem is that Article 115 of the Iranian Constitution states that only men can become president. It does not allow women to become a judge. Their testimony is not considered equal. So, how could women be equal if they are not treated equally by the law and women are considered lesser citizens than men? So, women are not equal citizens and they are discriminated against.

The participants also took strong positions on the legal age of girls in Iran. Dr. Kumari underlined the fact that this is a violation of the Child Rights Convention which has been globally accepted by almost all countries. She said: Nine years is a child. 18 is the age a person becomes adult. If you are punishing a child with 10 days of imprisonment, or 74 lashes of the whip, this is totally shocking putting children through all kinds of violence. This is not acceptable.

Ranjana Kumari said it is very important that this issue is highlighted in Mrs. Rajavi’s ten-point plan. It is very important that everybody is equal before the law. And the rule of the law is one of the fundamental principles of any democracy. So, in the name of holding elections, the country is being run in the most dictatorial manner. When a woman’s testimony is not equal to the testimony of a man, then she is not equal before the law, and this is not a democratic system. Women’s share of inheritance is half of men’s, this is discrimination.

It is also important to note that this inequality before the law is taking place under Rouhani who is supposed to be moderate, pointed out Elham Zanjani. Ms. Culi asserted: What is happening in Iran is suppression under the pretext of religion.

Another important issue discussed in the online conference was women’s lack of freedom in Iran to choose their clothing and covering and the various patrols that have been assigned to control women on the streets and in the work place.

Dr. Kumari declared: Freedom of clothing is a fundamental right of each person and it is not for the regime to decide. Women should be free to choose their own clothing, but in Iran we witness women have been targeted with acid attacks because their hair isn’t covered properly. Acid attacks on women in Iran is inhuman, illegal and unacceptable, and pressure needs to be placed on the Iranian regime. It is unacceptable that police penalizes women instead of protecting them.

Ms. Culi drew attention to the common practice of forced marriages of girl children in Iran. She said: The news of mass wedding ceremonies and forcible marriages are shocking. The images we receive from Iran are startling of children being married off and forced marriages. She further called for the adoption of a tough stance in this area which violates young girls’ basic rights.

Dr. Kumari warned that forcible marriages push girl children into sexual slavery. She also elaborated on every citizen’s right to vote and get elected. Iran’s constitution does not allow women to the highest office.

Elham Zanjani pointed out that women’s economic participation stands at 12, while political participation in the parliament is only 3%. This is while 60% of university graduates are women and they are not allowed into Iran’s job market. Dr. Kumari added that depriving women from leadership roles has led to the increase of suppression against women. The Iranian police harass women instead of protecting them.

In response to a question from the audience as to why they support the Iranian women’s struggle, Dr. Kumari said: As a women’s rights activist I want to stand by Iranian women. Mrs. Rajavi is very passionately driven for the people of Iran and for bringing democracy to Iran. I find her very genuine. I think it is very important that this movement is led by women and she is quite special.

Ms. Culi said on her part: I think women’s problems are universal, and so the problem of women in Iran is our problem. We must never leave our sisters in Iran alone and we have to support them and as an activist of women’s rights I stand by my sisters in Iran. Mrs. Rajavi says women are a force for change but she herself is a force for change and the Iranian women are very lucky to have her as a leader and I’m sure one day you will win.

Rouhani's scorecard on women in Iran