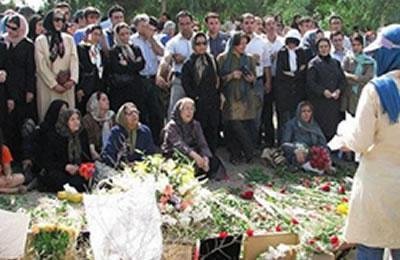 A number of women whose children have been executed by the clerical regime in Iran, issued a statement condemning the death penalty.

In part of the statement, they criticized the Iranian regime’s unfair legal system and wrote: “It has been many years that consecutive executions, without a fair trial, without a lawyer, and without observing international standards, have led to the loss of our children.

Many women have mourned their executed children over the decades, without having any clue on the place of their graves, where they could weep and shed tears…”

They also denounced the regime’s medieval practices to terrorize the families of execution victims: “Many of these mothers and wives have suffered twice as much as others for they had to pay for the bullets that killed their loved ones or had to receive a box of sweets from some petty men who made themselves their grooms before executing their daughters! (i.e. this is a reference to Khomeini’s fatwa which sanctioned rape of virgin girls by revolutionary guards before execution)…”

The bereaved mothers renewed their vows to unite to put an end to the death penalty in Iran:  “With bleeding hearts, we stand by the mothers, sisters and wives of the youths executed over the past decades until now. We call for collection of the gallows all across the country. We also demand prosecution of the perpetrators of these deaths, and we vow to continue our efforts to demand justice to the last moment of our lives.”