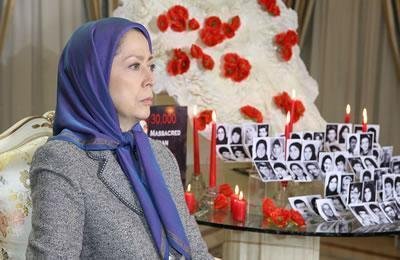 For the first time after 28 years, a tape recording a meeting between Mr. Montazeri, Khomeini’s successor at the time, and those in charge of the massacre of 30,000 political prisoners

in 1988, was disseminated on the internet, uncovering but a small part of the realities behind this heinous crime against humanity.

She pointed out: Montazeri’s statements, such as his description of the execution of a 15-year-old girl and of a pregnant woman in Isfahan, as well as the statements by the executioners in the meeting reveal the extent of the ruling regime’s ruthlessness and vengeance against the Mojahedin women and their glorious resistance. Addressing these murderers, Montazeri says, “I reminded Khomeini that according to the decrees of most religious scholars, a woman, even if she is a mohareb (enemy of God) must not be executed. But he did not agree, and said that women, too, must be executed.”

In the audio recording, one of the members of the death commission reveals: “As for the girls, God is my witness, as far as we could, we tried to bargain with them. I have very strong nerves, but day before yesterday when I saw only one of them… I was really devastated. I started pleading with her to write just a couple of lines and we would send her back to the prison.”

Mrs. Rajavi saluted all the victims of the 1988 massacre, particularly the women and girls who frustrated the regime with their heroic resistance. She said: They paid the price of standing loyal to the cause of freedom and equality. And there is no doubt that tomorrow’s free Iran will indeed blossom from their glorious sacrifice. This is a future which will be unquestionably realized.

Maryam Rajavi said: Khamenei and his regime have concealed all the information and details of this crime. They must be compelled to publicly announce the complete list of those massacred and the locations of their graves and mass graves, one by one.

She reiterated: As far as the Iranian people are concerned, they will never give up on their demand for the prosecution of each and every one of the regime’s leaders involved in this massacre, no matter how many years it takes. The United Nations and the UN Security Council must make the necessary political and legal arrangements for the international prosecution of the regime’s leaders for this crime against humanity. (Secretariat of the National Council of Resistance of Iran – August 11, 2016)