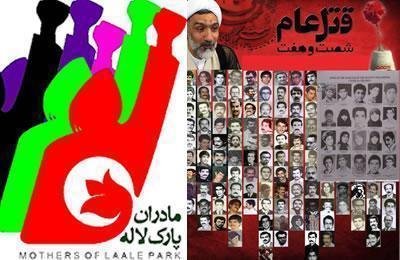 Iran: We demand prosecution of all officials engaged in 1988 massacre

Iran: We Demand Prosecution of All Officials Engaged in 1988 massacre

Park-e Laleh Mothers, a group of women who have lost their children mostly during the 2009 uprising, issued a statement demanding justice for their slain children.

The Iranian Resistance’s President-elect Maryam Rajavi issued a call on August 2, 2016, inviting all Iranians at home and abroad to join a movement to demand justice for the victims of the 1988 massacre by formation of an international tribunal to prosecute officials of the clerical regime engaged in the massacre as part of the national movement for Iran’s freedom.

The call was extensively welcomed by bereaved families who have been sending in photographs of their loved ones, information on their burial as well as on the method of their executions. Various individuals and groups of Iranians have issued statements demanding justice for their loved ones who have been slain by the clerical regime in its horrendous crimes against humanity.

Excerpts of the statement by Laleh-Park Mothers appear below.

The mass killings of political prisoners in summer 1988, is a political massacre, because the prisoners had prison sentences. They were either serving their sentences or had finished doing so. But they were executed in closed-door and unfair courts without their families’ awareness with a government decree issued by the Death Commission. Nearly 5,000 of the best human beings were executed in groups and buried in mass graves in Khavaran, Behesht-e Zahra and other unknown cemeteries.

According to the constitution of the International Court of Nuremberg, the massacre of political prisoners in 1988 can be considered as a “crime against humanity” or a “genocide.” The officials of the Islamic Republic share responsibility in this crime and must be tried in international courts because the Islamic Republic of Iran massacred groups of political prisoners who had prison sentences. They did so systematically, with planning, by torture and rape, and in closed-door, unfair courts in absolute secrecy.

The Islamic Republic of Iran maintained silence over the past 28 years to conceal its secrets. The mothers and families of “Khavaran”[1] and other activists seeking justice in Iran and abroad, however, have struggled in different forms all these years. They tried to confront this silence by demanding justice and persisting on it, to hold the regime accountable. They did not let the voice of justice become silent by protesting, staging sit-ins in front of the Justice Ministry, and writing to the judiciary officials and other official institutions. They held ceremonies at the cemeteries, had interviews, wrote revealing articles, held memorial services at home and at Khavaran, visited one another, and exposed the crime in other countries by publishing books, memoirs, and articles, having interviews, holding memorial ceremonies and participating in various conferences.

With the public dissemination of the audio file of Mr. Montazeri things became clearer than in the past. The important point was that the voice of (the members of) the death commission could be heard in this audio file and it could no longer be denied. Then the mass graves in Melakabad, Mashhad, were exposed to the public. Now, no one can ever deny these crimes and the regime’s officials have declared their positions, one by one.

Mostafa Pour Mohammadi, the Minister of Justice (!!) in Rouhani’s cabinet, shamelessly says: “We are proud to have carried out God’s verdict on the Hypocrites.”

Sadeq Larijani, head of the Judiciary Branch, says: “Whatever part of the court decrees that took place based on religious standards and laws cannot be disputed and the verdict for the groups that wage war on God, is absolutely obvious.”

Hashemi Rafsanjani called the audio file a desacralization of Khomeini and condemned its publication: “While expressing deep regret over the new wave created for assailing the Imam (Khomeini), which has also extended to almost all the opposing foreign media, they should not be allowed to achieve their goal in tarnishing the status of the late Haj Ahmad Agha (Khomeini’s son) and the grand dynasty of the Imam (Khomeini) in society.”

In the meeting of the Supreme State Exigency Council on August 27, 2016, Mohsen Rezaii and Majid Ansari, followed Rafsanjani in defending the regime’s conduct in the 1980s, and condemned what Majid Ansari called “efforts to smear the image of Imam.”

Majid Ansari is a so-called reformist, a close relative of Khomeini’s family, and former head of the Prisons Organization in 1986-87.

Hassan Khomeini says: “The executions were necessary to preserve the Islamic Revolution.” Other grandchildren of Khomeini, Moussavi Tabrizi, Moussavi Bojnourdi, and Mohammad Ali Ansari also joined the critics of Mr. Montazeri and supporters of the 1988 massacre in an obvious fashion.

Ali Fallahian, the minister (of Intelligence) in Rafsanjani’s cabinet, said this about the massacre: “The view of Imam (Khomeini) and all the scholars is that those who rebel against the Islamic Government must be sentenced to death and this must not be doubted. The leader said, God’s verdict must be carried out without paying attention to the judgment of history.”

Ahmad Khatami (Khamenei’s representative and Tehran’s Friday Prayer leader): “What the late Imam (Khomeini) did in 1988 was a work in the framework of jurisprudence, the Quran, the Revolution, and was a great service to the Muslim people of Iran.”

Ibrahim Yazdi: “The People’s Mojahedin adopted an opportunistic approach to Montazeri. We warned him about this; Ayatollah Montazeri’s confrontation with the Imam (Khomeini) was not prudent.”

Ali Akbar Velayati (Khamenei’s advisor on foreign policy and former foreign minister): “When I was minister, an Arab embassy disguised in a revolutionary appearance had infiltrated Mr. Montazeri’s house.”

Tajzadeh (former deputy Minister of Interior under Mohammad Khatami) says: “Forgive, but do not forget.”

When and where did this regime ask for forgiveness that Tajzadeh speaks of national reconciliation?  How could we speak of national reconciliation with a government that most shamelessly defends all the executions of 1988 and he 1980s, as well as the physical elimination, execution, torture of and heavy prison sentences for political activists and prisoners of conscience in its extra-judicial courts and who persists on continuing the same policies? Tajzadeh pragmatically says, “I apologize from the families of those executed in that catastrophe who were not members of the People’s Mojahedin.”

And Mottahari (member of the mullahs’ parliament) does not have any problem with the executions, but inquires about the methods and mechanisms involved in carrying out the executions.

In these days, Khamenei, Rouhani, Khatami and other regime officials as well as most of the state-backed reformists have also remained silent because they have been direct or indirect accomplices in these crimes and they know that if they say anything, they would be embarrassed even further.

At the time of executions:

Akbar Hashemi Rafsanjani, acting Commander in Chief of the Armed Forces, said on July 27, 1988: “A good opportunity has been created for us to annihilate them at this point and get rid of them.”

In his Friday prayer sermon on Friday, August 5, 1988, Moussavi Ardebili, president of the Supreme Judicial Council, said: “The Judiciary Branch is under tremendous pressure from the public opinion who ask why are (the political prisoners) being tried? Why all of them are not executed and some of them are being imprisoned?”

In the beginning of the revolution:

In his July 1988 speech, Hassan Rouhani told the parliament on the incidents in Tabas: “We demand that the Army and the Revolutionary Court do not haste about the conspirators. They should do extensive research and find the roots and my request is that they hang the conspirators during the Friday prayer before the audience so that it would have a greater impact.”

We, the bereaved mothers of Park-e Laleh and Khavaran, demand that all the government officials who were involved in the crimes of the 1980s and particularly the mass killings of political prisoners in summer 1988, be brought to justice. We demand removal, prosecution and punishment of all the criminals who hold senior judicial and executive positions of power. Over these 37 years, our land has been razed by people who have brought nothing but evil and hostility to freedom, justice and equality. Their laws and religious achievements have been extremely discriminatory and against freedom. They do not have the slightest respect for the lives and thoughts of human beings, and their inherent achievement is suppression and destruction of humanity. They have eliminated thousands upon thousands of freedom-loving and free-thinking, vibrant human beings. But enough is enough and we must find a solution.

In step with mothers and families of Khavaran, we demand discovery of the truth and we want to know the following:

We also express thanks to Mr. Ahmad Montazeri who dared to make this file public (despite a 28-year delay) and contributed to the discovery of the truth. We urge government officials to stop putting pressure on him and filing suits against him, because we and many of the families who seek justice will stand up to the pressures of the government on him or any other person who wants to help with “documents” to the discovery of the truth.

Again, we urge Mr. Ahmad Montazeri and others –who have defected from the regime and declare that the Islamic Republic’s officials are criminals and express regret about their complicity with this regime—to help the families and people who seek justice and expose their information about secret crimes of the Islamic Republic. No doubt, we will welcome such courageous and popular actions.

[1]  Khavaran is the name of a piece of land, a so-called cemetery, where the mass graves of part of the victims of the 1988 massacre are located.

​The savior is on her way