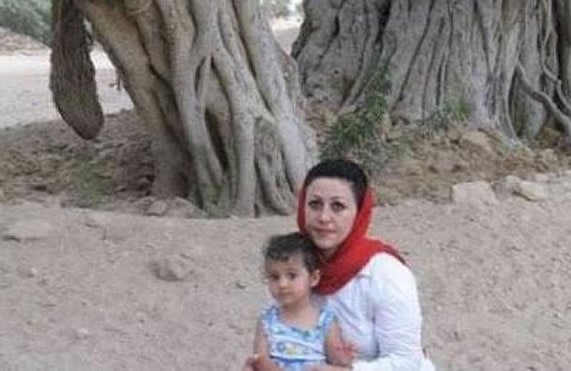 Political prisoner Maryam Akbari Monfared has sent out a letter from prison expressing her view on the sham presidential elections in Iran. Ms. Akbari has been in prison since December 2009 with a 15-year sentence to serve in prison.

The ruling regime feels the end of its rule and is terrified like a bull that is being slaughtered.

The (campaign for the) clerical regime’s sham election has started and the regime’s fear can be clearly seen in every line of the news published by the state-run media. Everyone knows that before every round of elections in Iran, the mullahs’ supreme leader shuffles his operatives and finally the Guardians Council picks a number of them for the show.

Everything from the representatives to the laws and political factions is decided by the supreme leader.

Under the mullahs’ rule, it is only Khamenei’s satisfaction that determines the credibility of everyone and everything. Holding elections is also just a show to give an aura of legitimacy to the regime. It is only a tool for the regime. Popular suffrage and democracy have nothing to do with the mullahs’ medieval rule.

Remarkably, the sham elections this time has turned into a scene for the rival factions to reveal facts about the corruption and plunders of the other, which in turn causes chaos and obviously leads to the political failure of both factions. This in turn indicates the decadence and disintegration of the pillars of a regime that the gentlemen claim is very strong and solidified.

Now, one has to ask whether the person elected is truly endorsed by the people. Is he truly the elected representative of the people when he is introduced to foreign countries and the United Nations?

They are the ones who bring about poverty and destitution for their people.

While Mr. Rouhani claims to bring prudence, hope and happiness, we have witnessed time and again that he has defended the execution, repression and carnage of the youths of our land.

According to official figures, the Iranian regime and his government have set a record in the large number of executions over the past four years.

Was it not in his government, when all the gentlemen came to the stage one after the other to recount the secret stories of the 1980s and take pride in what they did to our people?
Was it not (the Minister of Justice Mostafa) Pour Mohammadi, who was a member of the Death Commission in those days and is now one of the leaders and a high-ranking official of this regime?

Was it not this same government that executed 25 young Kurds all at once?

Was it not Mr. Rouhani who was the Secretary of the National Security Council in 1999 and had the main role in brutal suppression of the youths’ uprising in that year?

Promotion of corruption, prostitution and bootlicking is a product of tyranny. Such abnormalities in the heart of people’s lives is caused by lack of proper management. Unfortunately, as we have seen that Rouhani’s magic key not only did not help open any locks but created bigger locks. Of course, his key resolved problems for his relatives and associates.

Now is the time for a show called elections! Rouhani has undertaken ridiculous measures such as hiking and taking photos with young women to attract votes. This is while Rouhani is one of the leading figures who enforced the compulsory veil in Iran. This a good example of taking advantage of people’s votes. Economy and politics are abused even more.

The other candidate is Raissi who has been recently promoted to an Ayatollah. He was one of the members of the Death Commission in 1988. Since the beginning of the rule of the clerical regime, he held various posts as deputy prosecutor and prosecutor of various regions. A glance at his record reveals his involvement in mass executions. He has not had a single day of experience in the executive branch. In other words, his executive experience is made of countless executions in 1988 which made many parents mourn for their loved ones, those who are still looking for a sign of their children. Yet, these gentlemen boast of their work as carrying out the “divine edict.”

How are these presidential candidates going to wash the blood of the innocent off their dark existence? Is this question ever going to be posed to them in a presidential debate and have they thought of a solution for it?

I, Maryam Akbari Monfared, political prisoner at Evin Prison, have been in various prisons of the clerical regime for eight years. I have witnessed women being tortured and outraged. I have seen these tragic scenes in Gohardasht, Rajai-shahr, Shahr-e Ray and Evin prisons and having seen them, I can confidently declare that this fundamentalist regime is not able to tolerate any reforms.

The regime has picked ostensibly different candidates (i.e. reformist, fundamentalist, moderate, etc.), in a bid to convey a message of change. However, decades have passed and the outcome of these endless maneuvering and promises has been none but hollow propaganda. The proof is that our compatriots in Khorramshahr, Abadan, etc. have not yet recovered from the war.

The outcome has been general discontent and despair over the status quo, exodus of the country’s wealth, and the rebellion and flight of younger generations from the country. Others voluntarily embrace prison, torture and execution.

Today, the suppressive apparatus continues to run in the same cycle as it did in the past, in 1981, 1988, 1999 and 2009. Under the banner of Islam and pretending to defend the sacred rule of Islam, they slaughter the youth.

If this is Islam, then what is ignorance and reaction?

The regime resorts to any crime to prolong its rule. They jeopardize the security of people in other countries, such as Syria, Iraq, Yemen, etc. to reach their own objectives.

In its entirety, the regime is not capable of reform or correction. It is not capable of moderation or reform, nor can it provide any hope, because it is unprincipled and it does not have any roots. And it is totally illegitimate in the eyes of the Iranian people.

So, my vote is NO to the Islamic regime.