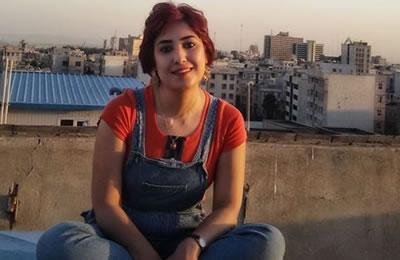 The solitary cell without a toilet

Because I had published a video clip in which I had spoken about being beaten up by prison guards, after being sent to exile to the (women’s) Qarchak Prison (in Varamin), I was returned to the solitary cells of the IRGC’s Ward 2A (in Evin Prison). I had to spent three harsh months, there.

One of the horrible conditions I had to go through which was considered kind of a “white torture” was that I had been placed in a cell that did not have a toilet. I had to slide a piece of paper from underneath the cell’s door so that the guards would see it through the (CCT) cameras. They would then come and take me blindfolded to the restroom.

Sometimes, the time passed very slowly and the guards did not come. I had to lie down on my stomach or sit down cross-legged, or cower and push myself down to the floor to reduce the pain I felt in my abdomen. Whenever I banged on the door so that I could use the bathroom, the guards insulted and humiliated me. They used to tell me that I could not get out of my cell from 11 p.m. till 8 a.m. to go to bathroom.

After my hunger strike when I did not receive any medical care, I ended up with the problem of frequent urinations. For 26 days, I had to lie on my abdomen and twist and turn out of pain. Although I had repeatedly objected to this situation, they did not do anything about it.

On the 26th night, I could not take it anymore and I urinated in one of the rough blankets in the cell. Early in the morning, I pounded on the door. When a guard came, I threw the blanket towards her and shouted at her, “You don’t know anything about humanity…” And she just grinned at me and closed the door.

A few hours later, I was transferred to a cell which had a toilet, but the stench of sewage in the cell gave me a headache and nausea.

More than two years past those days in the solitary, I still have to deal with that nightmare.

Sometimes, I go up to the roof and I think of my kind family and friends who are beside me; then I feel calm. And I sit down to watch every sunset with a smile, in the hope that the sun will rise the next morning…