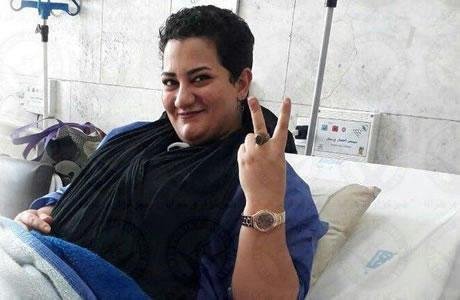 Iranian political prisoner Atena Daemi sent a letter out of prison announcing, “As an Iranian, I announce that not only I’m not an IRGC member, but I’m incarcerated because of IRGC’s crimes.”

Her statement follows the statements by the mullahs’ Foreign Minister, Javad Zarif, in reaction to the US black-listing of the Revolutionary Guard Corps (IRGC), indicating that every Iranian is an IRGC member.

Ms. Daemi refused to attend a scheduled trial on Sunday, October 22, 2017, to examine new complaints filed against her by Evin Prison’s infirmary. Atena Daemi said she would not attend the court because it was “unjust” and that “Khani, head of the infirmary, and Charmahali, warden of Evin Prison, had to be prosecuted for denying her medical treatment.”

Atena Daemi had to undergo another surgery after her cholecystectomy to remove large kidney stones which the prison’s clinic officials have prevented.