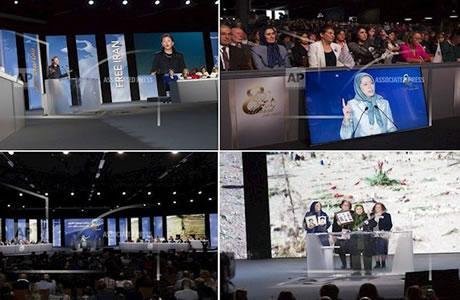 Dozens of prominent women including political personalities, lawmakers, jurists, judges, and women’s rights advocates from 23 countries in five continents, as well Iranian exiles and supporters of the Iranian Resistance participated in a conference in Paris on February 17, 2018, to honor the International Women’s Day and declared their solidarity with the women of Iran and the Iranian people’s uprising.

In the conclusion of the conference entitled, “Women Force for Change: Iran Uprising and the Role of Women,” they signed a resolution which reads as the following:

We the undersigned of 2018 Women’s Conference in Paris believe:

–  The brave revolt of Iranian women against the regime is beyond just fighting against the compulsory veil, it is for ending the theocratic dictatorship in its entirety and establishing democracy and freedom. Today women are indeed the force for change in Iran.  We support and celebrate the courageous women in Iran.

– The recent uprising in Iran is another manifestation of a nearly four-decade long glorious resistance against misogynous tyranny. The relentless and visionary leadership of Mrs. Rajavi and the resistance is vital to freedom for Iran and for Iranian women