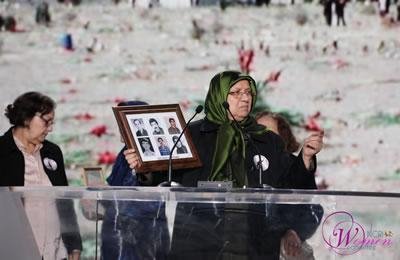 Greetings to our dear guests. Greetings to my daughter, Maryam.
I’m mother Ibrahimpour and six members of my family have been killed.

The first, who was arrested in 1981, was my thirteen-year-old child.  We didn’t know his whereabouts or whether he was still alive for about three months. Then, we received news that he has been imprisoned. He spent 14 months in solitary confinement in Evin, Gohardasht, and Ghezelhesar prisons.

Two of my other children, Ali-Akbar and Mehdi, were also arrested in the same year.  My eldest son, Abolfazl was murdered on the street in our town by Revolutionary Guards.

My husband, son-in-law, and pregnant daughter have also been killed by the regime.

I was able to finally get the body of my eldest son after two weeks and brought him to our town, Gorgan.  My family and relatives told me I should bury him at night. I asked, “Why should I hide him? He hasn’t done anything wrong, he is a Mojahed.” I told them I will bury him at 10 AM.  They said, “Pasdars (IRGC) will be present.” I told them I’m not afraid of pasdars, they should be afraid of me!

One end of his coffin was his dad’s shoulder and the other end was on mine as we carried him to his grave.  The cemetery was filled with Revolutionary Guards.  I sang the Ghasam anthem (a revolutionary song meaning the Oath) throughout the burial and when I buried him I made a vow to him that I will follow his path until my last breath. I held a 7-day ceremony for him at our house.  No mercenary dared to come near us but they had sent two women to tell me to quiet down.  I told the crowd I had opened the door of my home to freedom-loving people, which traitor has dared to betray us? Forcing them to leave and never return.

They executed Mehdi 40 days after Abolfazl.  He was tortured for four months and killed under torture.  His father and I dug his grave in the forest and buried him and held a ceremony for him, as well. We celebrated his martyrdom with a very big cake. A bus full of people and 20 cars all drove to the forest by his grave and we all sang the Mojahed anthem.  Again, no guards had dared to come, they were afraid of us.

Why am I telling you this? Because I want my daughters, sons, brave mothers and fathers in Iran to know that the regime is scared of you!  Face the regime, chant your slogans, and don’t let the streets become empty.  Don’t retreat.  Let’s get our vengeance for those 120,000 martyrs and the martyrs of the recent uprisings.  Let’s not let their blood be trampled.  Let’s not allow this regime to continue to suppress us.

Freedom is not given to us, rather you must gain it! We have to fight in order to achieve our freedom!

I urge the young women and men to fight and continue the path of these martyrs.  They sacrificed their lives for our freedom.  Join the people on strike and gather in front of prisons to demand the liberty of prisoners.  I want you all to be free.  Help and support each other, just like the slogan you chant, “Don’t be afraid, we’re all together.”

We are with you; we convey your voice to the world.

Aziz Rezaei is our idol, the idol of mothers of martyrs like me and thousands like me who have lost their children.  Don’t be afraid, support each other and let’s keep the fire burning.

The regime is aware that these are its final days and they are afraid of you! Down with Khamenei, viva Rajavi and the Liberation Army!

Change only comes when women are in leadership roles – Sandip Verma