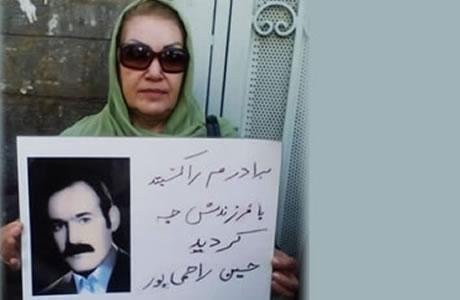 Raheleh Rahemipour faced another trial on Saturday, May 5, 2018.

Ms. Rahemipour is charged with “spreading propaganda against the state, participation in protest gatherings, filing complaint with the UN, and giving interviews to foreign media.”

She has been told by the court that if she can place an 800-million-touman bail, she can be freed, otherwise she has to go to jail.

Amnesty International issued a statement on May 4, 2018, calling on the Iranian authorities to stop their harrassment campaign of Raheleh Rahemipour. The statement reads in part:

The Iranian authorities must stop their ongoing harassment campaign against Raheleh Rahemipour, a 65-year-old human rights defender, who faces trial for a second time in reprisal for a complaint filed with the UN on the enforced disappearance of her brother and his infant daughter.

Raheleh Rahemipour is due to appear before a Revolutionary Court in Tehran tomorrow, 5 May, on the charge of “spreading propaganda against the system”. This trial is the latest instalment of an ongoing harassment campaign that began in March 2016 after the UN Working Group on Enforced or Involuntary Disappearances received a complaint concerning the enforced disappearance of Raheleh Rahemipour’s brother Hossein and his infant daughter, Golrou, while they were held in Tehran’s Evin prison between 1983 and 1984.

“For over three decades, the Iranian authorities have shown a complete disregard for the pain and suffering inflicted upon Raheleh Rahemipour who has been left in the dark with no information about her loved ones. It beggars belief that they are willing to further punish her now, simply for seeking the truth about the fate and whereabouts of her brother and his baby daughter,” said Magdalena Mughrabi, Deputy Regional Director for the Middle East and North Africa at Amnesty International.

“Shockingly, Ministry of Intelligence officials have now told Raheleh that they would stop the prosecution if she agrees to withdraw the complaint that stands before the United Nations. This is yet another distressing example of how far the Iranian authorities are willing to go to silence human rights defenders and shut down all communications with international human rights mechanisms.”

Raheleh’s brother, Hossein Rahemipour, and his pregnant wife were arrested in August 1983 for their affiliation to an opposition political group. A year later, his family was called to collect his personal effects from the notorious Evin prison in Tehran. The family understood this to mean that he had been executed, though his body was never returned and no death certificate was ever issued.

Raheleh’s niece, Golrou Rahemipour, was born in Evin prison in April 1984 and taken away from her mother when she was just 15 days old, apparently to undergo medical tests. The family was later told that she had died. The Iranian authorities have not provided a death certificate or further information on the circumstances of her death or burial.