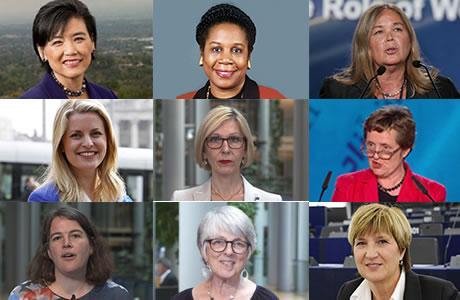 Grand Gathering of Iranians in Paris – A number of women dignitaries from the U.S., Europe and Latin America expressed their solidarity in messages to the Iranian diaspora who are holding their annual gathering on June 30, 2018, in Paris.

In her message to organizers and participants in the grand gathering of Iranians in Paris for “Free Iran – The Alternative”, the Hon. Justice Susana Medina, Minister of the High Court of Justice of Entre Ríos, Argentina, supported the work of the National Council of Resistance of Iran and its President-elect Maryam Rajavi to achieve “a free and democratic Iran; an Iran where the state is separated from religion; a tolerant state that ensures the validity of the human rights of all, but especially of women, elderly and children.”

In her video message to Iranians “who love freedom,” U.S. Congresswoman Sheila Jackson Lee, said, “I want to express my commitment and my support of a secular, democratic, non-nuclear republic of Iran as addressed in Mrs. Maryam Rajavi’s Ten-point Plan. I believe that democratic change in Iran is within our reach, not only because the regime is engulfed in so many crises but because like you, there is a large and growing group of freedom lovers in Iran and around the world. And I believe under the leadership of Madam Maryam Rajavi… freedom is coming.”

In another part of her message to the Grand Gathering of Iranians in Paris, Rep. Jackson Lee said, “As you meet over these days, and as you speak about freedom, the sound of your voices will reach to Iran and those who are fighting for freedom, separate and apart from an oppressive regime, they will be victorious. I congratulate you and celebrate you for this great meeting. And I celebrate your great leader, Maryam Rajavi, who has explained and expressed her commitment to freedom and to human rights and to dignity. And together, we will succeed.”

Congresswoman Judy Chu representing California at the U.S. House of Representatives also sent a message of solidarity to the Grand Gathering of Iranians in Paris. She said in her message, “I want to send my best wishes for a successful 2018 international convention for a free Iran… I want you to know that I stand in solidarity with you and your fight for freedom, democracy and human rights in Iran. I am so proud to stand with you in speaking out against Iran’s theocratic leaders. I strongly support your work to establish a free and democratic Iran that works with the U.S. and others to build a safer world, not one that funds terror or abuses its own people. So, thank you all again for all your important work to promote human rights and a free Iran and know that I am proud to join you in this effort.”

Support from Europe’s House of Democracy

Having closely followed and supported the Iranian people’s struggle for freedom and democracy, Ms. Beatriz Becerra, member of the European Parliament from Spain and an active member of the Friends of a Free Iran inter-group in the EP, said in her message to the Grand Gathering of Iranians in Paris, “We have been watching with admiration your brave uprisings and protests all over Iran in recent months. I am particularly encouraged by the role women play in leading many of these protests. I think Maryam Rajavi, President-elect of the NCRI, whom I have met several times, is a role model for many women who want to stand up for their rights in Iran.”

Ms. Becerra also pointed out, “From all indications, we can see that after nearly four decades of brutal and anti-women rule of the mullahs, the change is about to come to Iran… I, therefore, believe that the Grand Gathering of the Iranian opposition that will be held in Paris on 30 June, can be a turning point towards a democratic change in Iran.”

Ms. Ruža Tomašić, Member of the European Parliament from Croatia, also said in a message, “I am so happy that so many of you showed that you want to take Iran in your own hands and make a democracy like you deserve. And since you are having a freedom gathering in Paris, I wish you all the success.”

Messages of solidarity from British MEPs

Another member of the European Parliament, Ms. Anthea McIntyre, MEP from the U.K., also sent a message of support to the Grand Gathering of Iranians in Paris, in which she declared support for the Iranian Resistance Movement and its leader, Maryam Rajavi.

Ms. McIntyre denounced efforts of those who try to appease the mullahs and stressed, “We need to be standing up for human rights, not just trade at any price. Human rights are very important, and I want to see our European leaders standing up for human rights and refusing to sign trade deals just on the whim rather than true facts and to see actually true progress being made… I think it’s very encouraging, when we see people in Iran taking to the streets and standing up against the regime that we have got at present.”

She also noted the role of Iranian women in the uprising and the Iranian Resistance and said, “We must see proper democracy; we must see Maryam Rajavi and the opposition come to power in a full democratic way. I am so much in favor of gender equality and I want to see a woman leader in Iran. I think that would solve an awful lot of our problems.”

Ms. Julie Ward, another MEP from the U.K., also addressed a message to the Grand Gathering of Iranians in Paris in solidarity and support. Having closely followed the situation for the past few years, she expressed concern in her message about human rights and addressed the situation of women in Iran, saying, “I am very much concerned about the human rights violations and the repression of women in particular. I have always believed that the people of Iran with such a rich history, deserve not to be ruled by a group of backward medieval mullahs. I am particularly troubled by the way the security forces are treating women to impose compulsory hijab.”

MEP Ward once again underscored her support for the Iranian opposition, “Therefore, the resistance against this regime by the PMOI/MEK and by Maryam Rajavi for a free secular Iran has had my sympathy and support. I was therefore pleased to witness the uprising of the Iranian people in January and escalation of protests and strikes which are happening every day… I wish my Iranian friends and the organizers to have an excellent and successful gathering.”

Ms. Emma McClarkin, another MEP from the U.K., also expressed support for the Grand Gathering of Iranians in Paris. She said in her message, “The people of Iran want real change. From the protests in January, we have seen that you want an end to oppression. That you want freedom and democracy to come to Iran and an end of the oppression by the regime and their security forces. On the 30th of June, I am delighted that the Iranian community will be meeting in Paris… We in the European Parliament will be participating, we will be watching, we will be listening. And we will always be supporting a free Iran.”

Ms. Jude Kirton-Darling, Member of the European Parliament, also from the U.K., joined her colleagues in the European Parliament to express her best wishes for the Paris rally on the 30th of June for a free Iran. She stressed in her message, “I believe the European Union and our governments must put human rights as their priority in dealing with Iran. Human rights in Iran continue to deteriorate with peaceful protesters facing intimidation, violence, detention and torture.”

Ms. Kirton-Darling placed special stress on women’s role in Iran uprising, saying, “That the regime blames these protests on the PMOI, shows how concerned the regime is about the opposition movement under the leadership of Ms. Maryam Rajavi. Women have played an active role in these protests and I really admire their courage. I stand today in solidarity with my Iranian sisters and send solidarity to all of you.”