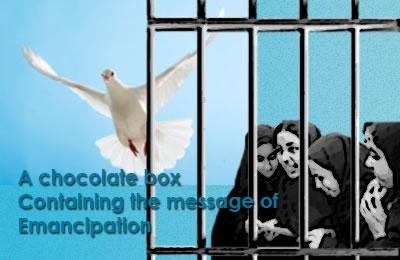 A chocolate box containing the message of emancipation

It was the end of spring of 1987 and we have just settled in a ward at Gohardash Prison (in city of Karaj, west of Tehran).

We were restless; Camp Ashraf and the all-women units had been founded. This was our point of hope and we wanted to get its news at any cost.

Among the prisoners, there were some who had been arrested along with their family members. One way to obtain news was through meeting them at the men’s wards.

This wasn’t easy because prison guards would not easily permit that, and to break the prisoners’ resistance, the guards told them to ask for such visits in writing. Many of these requests were rejected and if accepted, the visit had to take place for only a few minutes and in the presence of the guards.

This was an issue for us to fight for our rights.

Every once in a while, a prisoner filed request to meet her husband or brother. One of them was Tahereh Davoodi.

One of Tahereh’s brothers, Jalal, had been hanged at Evin Prison in 1981 and prison guards left his body hanging for some time to become a lesson for the rest.

Tahereh had a younger brother, too. His name was Jamal and he was confined in Gohardasht Prison. She asked to meet him and sometime later, she was called for that.

After the visit, Tahereh entered the ward with a chocolate box and loudly announced, “Gals, come on! Jamal sent his greetings and respects to you all and sent these chocolates for you.”

So, everyone surrounded Tahereh to take a chocolate. As the noise of chocolate wrappings filled the room, one of the girls suddenly shouted, “Hey, look! There’s piece of paper in my chocolate.”

We surrounded her, gazing at the paper; a narrow piece of paper scrawled on with a pencil in tiny bitsy words, but containing a fate-making news. The big news was that Maryam Rajavi had become co-leader of the main opposition organization, the PMOI. This was a great revolution in the Iranian people’s Resistance which heralded women’s equality and emancipation.

Women’s participation in the leadership level of the movement seeking to topple the mullahs’ misogynist regime would have major impact on women who were the force for change. It boosted the morale of all resilient prisoners to resist even more against the regime’s oppression and torture.

We read it time and again, and learned it by heart.

We used the same method and conveyed the message to other wards.

Thanks to Tahereh’s courage, the resilient women in prisons learned of the message of emancipation and doubled their efforts to free their homeland.

Tahereh Davoodi was released but arrested shortly afterwards and suspiciously disappeared in Spring 1988.

Jamal Davoodi was hanged during the massacre of political prisoners in 1988 at Gohardasht Prison.