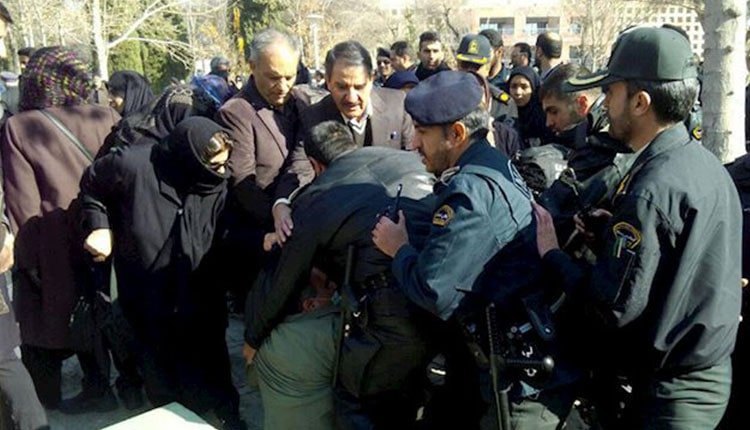 The brave teachers and educators of Isfahan, with remarkable participation of female teachers, gathered in large numbers outside the Department of Education and held a protest on Thursday, December 27, 2018.

State Security forces and intelligence agents had been stationed in the area since early morning. Police officers, including plainclothes agents, had been sent from all over Isfahan Province to identify the protesting teachers.

However, these brave women put up an impressive resistance by continuing their chants despite being pepper sprayed.

SSF women attacked some of the female teachers who were wearing chadors, trying to take off their veil to identify and arrest them. One of their tactics was to snatch the purses of female teachers and run towards the police vans. In this way, they made the purses’ owners run towards the van, pushing them into the van and forcefully arresting them.

The regime had also hired a number of thugs to snatch the purses of female teachers to identify them in this manner.

A number of teachers fainted during the attacks due to old age or physical weakness and a number of them had nausea and fell to the ground.

Isfahan Province in central Iran has been the scene of major anti-government protests since last year when the Iranian people’s uprising began.

Active participation of women in protest rallies across Iran