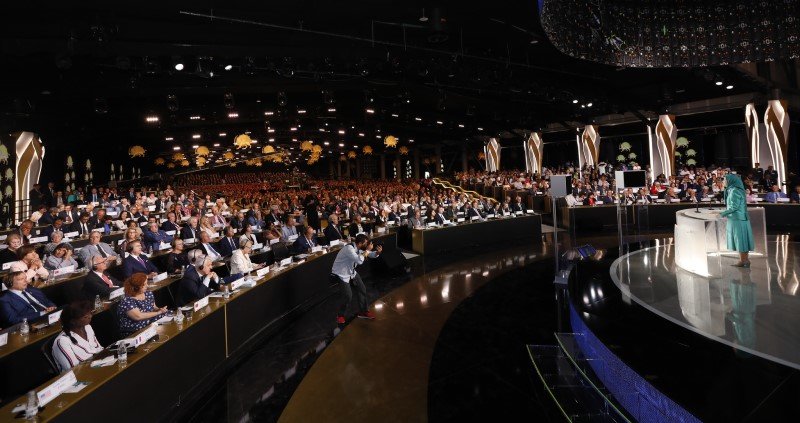 The annual Free Iran Gathering of the Iranian opposition was held, on July 13, 2019. The event was held for the first time at ‘Ashraf 3’, the headquarters of the People’s Mojahedin Organization of Iran (PMOI) in Albania.

Hundreds of lawmakers, officials, and dignitaries from around the world assembled in Albania to join the 2019 annual Free Iran Gathering.

Maryam Rajavi, president of the Iranian opposition, the National Council of Resistance of Iran, NCRI was the annual Free Iran Gathering keynote speaker. She welcomed the supporters of the Resistance and said:

The National Council of Resistance of Iran has concrete plans and programs. Thanks to its organization and cohesiveness, the NCRI can replace the regime and is able to ensure a peaceful transition of power to the Iranian people’s elected representatives.
Yes, the day is not far when Iran, the Land of Lion and Sun, will embrace freedom.
We are determined to create a new future, a new plan devoid of tyranny, reactionary thought, duplicity, and discrimination. A new design for a free and prosperous Iran.
So, we will sing in unison as we march toward victory: we will take back Iran and we will build a new homeland.
Yes, indeed, we will take back Iran.

Iranian opposition President Maryam Rajavi has led this movement and today we are witnessing the regime in Iran on the brink of overthrow. I would like to thank all the distinguished guests with us here today (at the annual Free Iran Gathering) and those who couldn’t join us, for all their support in all these years.

I thank you for representing a vision, a direction that unites all Iranians and many people in the world… Iran is behind all the crises in the Middle East. Iran destabilizes the whole region. Iran finances terrorists and supports them with weapons. We are lucky enough to enjoy these values, but we almost lost them at a certain point. There were friends who helped us to keep them. For these reasons, we have to stand with the Iranians who want to protect their fundamental human rights.

Dear MEK members and the Iranian people, on behalf of a French committee for a democratic Iran. We are proud to be here with you. While tensions between Iran and the U.S. are on the rise, we are here to protect the interests of the Iranian people and protect democracy. The Parliamentary Committee for a Democratic Iran considers the deteriorating human rights situation in Iran should be discussed before any relations are resumed with Iran’s regime. President Emmanuel Macron said he was determined to observe human rights violations in Iran during his talks with Iranian officials. However, these principles are violated by the regime to this day. The regime has destroyed all that you have owned in Iraq. You have revived and you keep fighting for a democratic Iran against the mullahs. Your battle is not in vain and I know one day you will be hosting me in a free Iran. The French people consider you brothers and sisters. Article 2 of the human rights declaration says that the aim of any political group is human rights and that includes the right to resist oppression.

I know how difficult it is to talk about our own suffering, and we tend to be very abstract. Yet with the exhibit that you showed us at the museum of the Iranian Resistance in Ashraf 3, Madame Rajavi, the tortures that we saw there can only come from a psychopath. Shame on those who demonize the MEK for the money of the Iranian Regime’s Ministry of Intelligence and Security (MOIS. Two weeks ago there was an op-ed in The New York Times that said the IRGC is a transformed institute that is loved by the people and that’s why the Trump policy will fail. But that’s bogus and it’s exactly why the U.S. policy will succeed because they are cutting the regime’s financial assets. Madame Rajavi, you are the force of change, the beacon of change, you are the phoenix rising from the ashes of devastation of the mullahs. Maryam and Massoud Rajavi, you are the guarantee of peace and democracy in Iran and the world. To the mullahs: We are ready to take you down. We are united with the people of Iran that are taking the risk in Iran. We are coming to get you, the mullahs. We will get you, we will hold you accountable for the crimes you’ve carried out for decades.

When I think about darkness, I think about where I was born in Czechoslovakia, to parents who fled from concentration camps. I read all my life about terror and torture. Yesterday, when I saw the darkness and the numbers of destruction in the Ashraf 3 museum and heard the voices of those who shared their stories, I saw the light in their eyes. I’m not trying to be biased but the light in the eyes of the women came shining out and struck me. I said to them that you are very, very special and a part of what we need in this world today is more light. You are going be the light that lights up the world… Be brave and keep lighting up.

There is a new city, Ashraf 3, built here in Albania by thousands of Iranians who survived the attacks of the Iranian and Iraqi governments. Thank you to the Albanians who made it possible for the Ashrafis to have somewhere to stay, after their great sacrifices. What you have achieved here, you can achieve in Iran in one day. I am emotional when I see the Iranian Resistance’s museum at Ashraf 3 and the MEK’s 120,000 martyrs. Iran is a nuclear threat and a religious threat, starting from the same nature of the Iranian Regime… the MEK members have paid the price of resistance with their lives. They are supportive of Islam but are against fundamentalism and they put women at the center of their movement. 2018 was a dark year for human rights in Iran, and we should be concerned about that.

Such a joy, pride and honor to stand before the Iranian Resistance. I come from Nepal that is known for the Himalaya and the Budha. For the last three decades, I have worked for gender equality. I’ve started from my community in Nepal but my journey took me to the corridors of the United Nations. I recall 20 years ago, the moderator would ask one question and we had to answer within 10 seconds with one sentence. I said that I want every family to rejoice the birth of a girl. I think that the power and resilience of the women of the Iranian Resistance is an example for other women in the world. When I looked at Maryam Rajavi’s ten-point plan I saw so much similarity with what we are advocating for… There cannot be peace without women. When your movement is led by a woman, peace is guaranteed sooner than later.

The testimonies we received from the Ashraf residents put our humanity to test. I felt rage and hope, seeing the survivors continue their struggle with determination. Human dignity will defeat evil. In 2005, I was in Evin Prison as a UN human rights rapporteur. The conditions in the prison were very pleasant as the authorities knew we were coming… We lived in a troubled region. We the people of the region have aspirations for rights and freedom… Misogyny is now observed strictly in Iran. Many rapporteurs have repeatedly written about violence against women in Iran. Yet we must also note the women’s resilience on the street, in social media and even in the privacy of their homes. The new generation of Iranian women who are the product of the revolution era is as bold as their predecessors… Those of who support freedom and justice in Iran must join forces to empower the Iranian people’s struggle. We also need to navigate the region’s political forces. Iranian people, men, and women alike are the force of change.

It is an honour for me to address you today and I would like to thank the sponsors and the organisers, Ashraf 3 and the NCRI Women’s Committee for inviting me to participate in this meeting…

The activism and advocacy for a free and democratic Iran is being fought on many fronts by many individuals and organizations. Two examples that resonate today, include among others, the struggles of people from Camp Ashraf and the leadership of many, including Mrs Maryam Rajavi. It is humbling to hear about the struggle to escape from all forms of violence and oppression – but also affirming to see how people who have been resettled in Albania, continue to strive for a life of dignity. Thank you for including us today in your continuing struggle for a democratic Iran.

Mrs Rajavi and her team reflect the crucial role that women continue to play.

Your resilience, your strength, and your hard work are evident to the whole world. Every stone speaks about your resolve. I bring greetings from the global women network for change. Tyrants can suppress people for some time but when people rise tyrants don’t know where to go. What more than the global leaders want to see that the ten-point plan of Maryam Rajavi… I know that today we are one step closer to Iran, Maryam, Freedom… May you all see the victory under the sky very soon and I’m sure with all the global leaders here it won’t be long.

I come from Argentina, a victim of the Iranian regime’s terrorism… Maryam Rajavi’s ten-point plan is a plan of human rights. I hope to go with Maryam Rajavi to Iran where you will establish justice, gender equality, and freedom… Only on these terms can we have a free Iran.

There is no one stronger than a woman fighting for her children and land. Brave women in Iran are challenging the regime in every possible way. Many have been imprisoned and tortured in Iran. The prominence of women in the resistance is reflective of the role of women in Iran. It is time for the world to stand up and support the work of the NCRI. The regime in Iran considers women activists as enemies of the state… My sister, Maryam Rajavi, a Muslim woman makes the resistance a unique example in the Middle East. We hope to celebrate Madame Rajavi’s success, your success, our success in Iran soon

Your martyrs sacrificed their lives in order to achieve freedom for Iran. We cannot have appeasement with such a bloodthirsty regime. We must investigate the Iranian regime’s human rights violations… We support you in your goals and stand with you.

Dear brother, sisters, and friends, we support the MEK and all of their efforts. The Iranian regime’s human rights violations dossier must be referred to the UN Security Council… I support Madame Rajavi. She is beautiful inside out… We have our differences in Albania but we are united for the cause of MEK.

Women in the Iranian Resistance