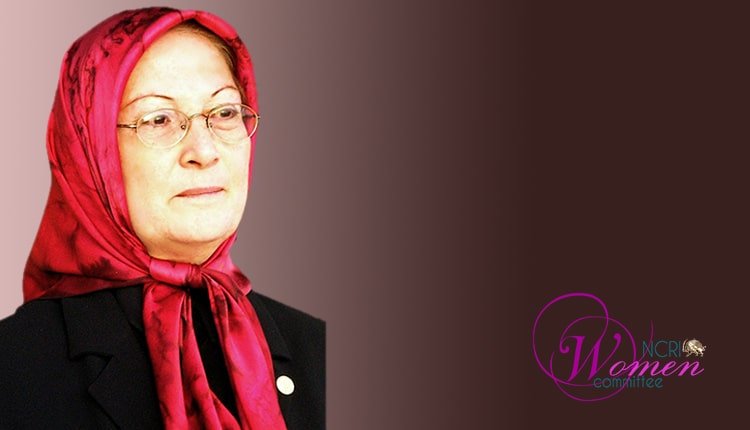 There are people in whom resistance, endurance, and patience are well manifested, and whose names encapsulate the earthly human values; Fereshteh Akhlaghi is one of them.

Born in 1949 in a middle class and political family, this 70-year-old has spent 33 years of her life in the Resistance.  She is the first daughter of her family and has two sisters and two brothers. With four children, two boys and two girls, all of whom are in the ranks of the Resistance, she describes herself as grateful and happy.

Fereshteh Akhlaghi has experienced the struggle and resistance to dictatorship since age 5; she recalls:

I grew up in a political family. In 1953, I was five years old when I witnessed my father’s arrest near our house. My grandfather was also a militant of Mirza Kouchak Khan and lost his life during the uprising of the forest.

After that, I became acquainted with the PMOI/MEK through one of our close relatives, Ghassem Bagherzadeh, who was a political prisoner at the time of the Shah. During my weekly visits of Ghassem in Qasr Prison, for the first time I saw Massoud Rajavi, the leader of the Resistance, behind prison bars.

Ever since, the Mojahedin became my primary goal and wish because in them I saw human values ​​and all that I believed and was hopeful about.

If I were asked to recall the happiest moment of my life, I’d say it would be the summer of 1985.  While on a visit to Paris, I learned through a friend that I had the possibility of joining the Mojahedin.

Up until then, I thought that in my age and as a mother of four, it would be impossible to join the Resistance but after my friend’s guidance and when I officially wrote and sent in my request to join, I was promptly given a positive answer.  And receiving this answer has been one of the happiest moments I’ve ever experienced in my life. I was filled with excitement and my world took on a different meaning. I had become one of the freedom-fighting Mojaheds and this was the fulfillment of my highest wish.

About what she does in the Resistance, Fereshteh Akhlaghi explains:

My work here in the Iranian Resistance is one which is truly valuable to me and holds a special and dear place in my heart. I document and follow up on the status of martyrs and families of those heroes who have sacrificed their lives in this Resistance. This has been my job for the past 25 years; keeping a record of thousands of moments and memories of the selfless youth, women and men of the Iranian Resistance who have sacrificed their lives. The work in the Research Unit on Martyrs involves recording the lives of each martyr, completing and updating their memoirs and stories through historical references and facts we obtain through their families, friends, or relatives; stories involving wandering around in search of their children to standing behind prison walls in order to follow up on their loved ones, and all the insults and humiliation which they have been subjected to throughout these years.

It may be a bit hard to believe but there are families who have been searching for their loved ones for more than 30 years or to at least know where their children were buried… Learning of all these difficulties and hardships, often make me tearful but also more determined.

There are also moments which have definitely put a smile on my face.  I have witnessed a real revolution in Iran and I know the changes brought about by revolution are beautiful. I remember clearly the revolution of 1979. The streets were filled with people’s joy. People’s happiest days were spent with courage, kindness, and true friendship; and Iran experienced real freedom for the first time.

Although Khomeini’s dictatorship hijacked the revolution and took away my people’s freedom for all these years, I have no doubt that in the presence and existence of this Resistance, freedom will return to my people and will be even more beautiful than 1979.

In a short matter of time, all the suffering, pain, and the wounds of this nation will heal and recover with the dedication of our women and men to a free and democratic future as they reclaim Iran.

Fereshteh Akhlaghi also spoke of her conviction in the realization of a beautiful human society in tomorrow’s Iran:

There’s a point I must emphasize and that is today’s Resistance and freedom fighters are the reflection of Iran’s tomorrow.

In the ranks of the Iranian Resistance, there are women from various classes of society each with their own views, perspectives, education, family history and different ages and generations.  We have all come here from different walks of life and places.

Sometimes there are assumptions about some women’s experiences, age, and social status that may portray them as more experienced and competent than others. Yet, for some, this question arises that how can we accept and follow the commands of a woman who could have the age of my daughter? Or how can we have a true disposition towards the newer and amateur ones?

My answer lies in human values ​​which has attracted me and everyone else in the Resistance to this organization. We have seen and learned that in the Mojahedin Organization (PMOI/MEK), the relations between members of this movement is made of love, kindness, and unity, which surpasses any difference in sex, age, experience, and personal characteristics.

We have experienced that we can look at one another and see the prominent human qualities of each and discover valuable lessons of humility, a true indicator of competence.

With such a culture, I can tell you that I am learning from everyone around me, and I am grateful to each and every one of my sisters and daughters from whom I can happily and easily accept orders.

This is how today, we are the reflection of tomorrow; bright, free, and liberated tomorrow for Iranian women and men and a society whose only hope is in this Resistance and its freedom fighters.