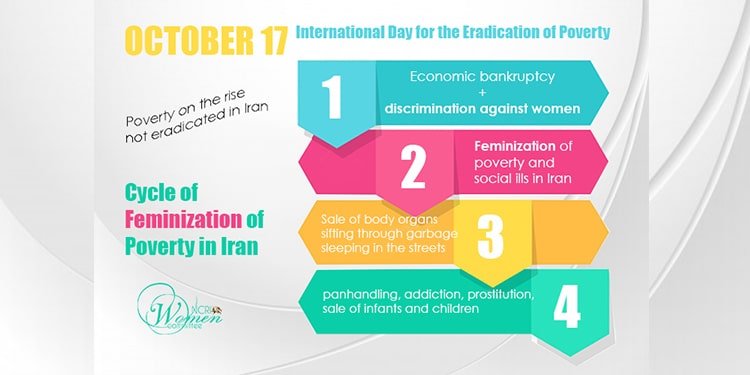 Feminization of poverty on the rise, not eradicated in Iran – 2019

Iran is a country sitting on a sea of ​​oil. Iran holds the world’s second largest natural gas reserves. Its natural resources are abundant, and the country has access to open sea in the north and south. Yet more than 80 percent of the nation lives below the poverty line, and the middle class has essentially disappeared.

Poverty is growing by the day as the ruling regime’s damaging policies have led to the closure of factories and production units, and the destruction of agriculture, leading to increasing unemployment. At the same time, soaring prices and inflation had already diminished the public’s purchasing power, even before the coutry’s currency suffered a free fall.

Destruction of environment, plunder of public wealth, fraud and embezzlement in all national projects, rendered the people of Iran defenseless before natural disasters such as earthquakes and flashfloods, again adding to the population of the poor and helpless.

A simple search for the word “poverty” on our website reveals how all sectors of Iranian women have been affected. Teachers, students, nurses, government employees, workers, women heads of household, etc. Education of future generations has been a major victim. In the meantime, poverty fuels spread of various social ills, from panhandling, child labor, sale of organs, early marriages, homelessness, and sifting through garbage for food, to addiction, prostitution, sale of children, infants and unborn fetuses, and suicides.

For example, 82 percent of the 3.6 million female heads of household have no decent jobs and live under the poverty line without receiving any government support.

As a consequence, most women are driven to low-pay jobs in the private service sectors, where businesses recruit more women to pay less to their workers.

Zahra Shojaii, secretary general of the so-called reformist women’s assembly, has stressed on feminization of poverty in Iran. She says, “Poverty has become feminized. Social ills, suicide, runaway girls, addiction, and a rising number of female prisoners are some of the issues we face.” (The state-run dustaan.com, June 20, 2018)

Women Heads of Household among the poorest

3,600,000 women have been officially registered as women heads of household in Iran, according to Massoumeh Ebtekar, head of the presidential directorate on women and family affairs. (The official IRNA news agency, October 7, 2018) But the figures announced by the regime’s officials must be considered as the minimum.

Over 3 million or 82% of women heads of household in Iran are unemployed. (Massoumeh Ebetkar, the state-run ISNA news agency, July 7, 2018)

According to a research, “the three main problems women heads of household face in Iran are discrimination and inequality, unemployment, and lack of social security,” said Susan Bastani, strategic studies deputy at the directorate for women and family affairs, adding, “The next problems they face are lack of freedom and choice, lack of social respect, poverty and economic deprivation. (The official IRNA news agency, May 4, 2019)

According to Anoushirvan Mohseni Bandpay, head of the National Welfare Organization, only 180,000 women heads of household are receiving welfare. “With regards to occupational loans to women without guardians or with bad guardians, however, the organization faces major challenges,” Bandpay said. (The state-run Tabnak website, February 13, 2018)

For all the reasons briefly stated above, on the International Day for the Eradication of Poverty, we see that poverty is on the rise in Iran and women are its prime victims.