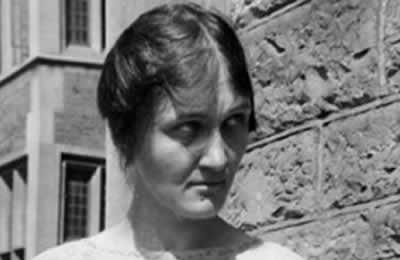 in astronomy from Radcliffe (now Harvard), proposed an explanation for the composition of the stars in her astronome.

Cecilia Helena Payne was born in Wendover, England on May 10, 1900.

In 1919, she won a scholarship to Newnham College, Cambridge University, where she studied botany, physics, and chemistry

She left England in 1923. This was made possible by a fellowship to encourage women to study at the observatory.

In 1925 she became the first person to earn a Ph.D. in astronomy from Radcliffe College (now part of Harvard). Her thesis was “Stellar Atmospheres, A Contribution to the Observational Study of High Temperature in the Reversing Layers of Stars.” Astronomers Otto Struve and Velta Zebergs called it “undoubtedly the most brilliant Ph.D. thesis ever written in astronomy”.

In 1956 she became the first woman to be promoted to full professor from within the faculty at Harvard’s Faculty of Arts and Sciences.

She published her writings on the women’s movement under the pseudonym Ruth Bré. Following her early retirement, she became active in the women’s movement in Germany, of which she belonged to the radical wing. From this point on she wrote treatises on the rights of mothers, a novel and articles. Bré founded at least one mothers’ colony on the model of matriarchal societies.