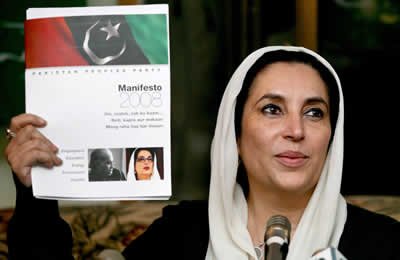 2007 – Benazir Bhutto, first and only female Prime Minister of Pakistan. Her PPP office was stormed by unidentified gunmen.

Benazir Bhutto (June 21, 1953 –December 27, 2007) was the 11th Prime Minister of Pakistan, serving two non-consecutive terms in 1988–90 and then 1993–96. A scion of the politically powerful Bhutto family, she was the eldest daughter of Zulfikar Ali Bhutto, a former prime minister himself who founded the Centre-left Pakistan People’s Party (PPP).

In 2007, she returned to Pakistan, having reached an understanding with President Pervez Musharraf, who granted her amnesty and withdrew all corruption charges against her. Bhutto was assassinated in a bombing on 27 December 2007, after leaving PPP’s last rally in Rawalpindi, two weeks before the scheduled 2008 general election in which she was the leading candidate. Her party subsequently won the elections on a wave of sympathy generated by her assassination.