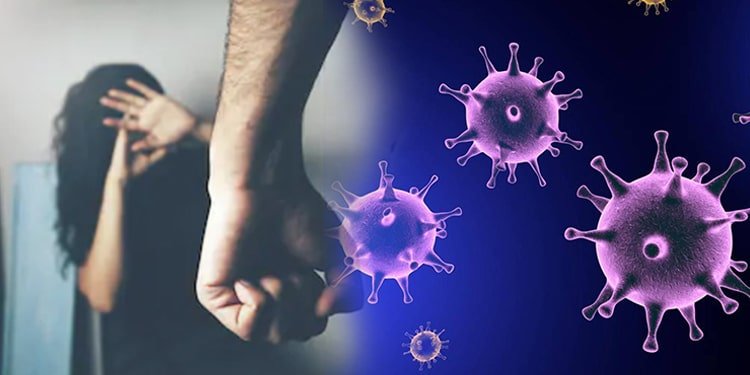 Stay-at-home lockdowns in response to the coronavirus crisis have led to a dramatic rise in domestic violence against women around the world so much that the UN calls it, “the shadow pandemic.” In Iran, however, lack of virtually any form of government support for low-income and impoverished families as well as the absence of any authority to attend to the victims of domestic violence have accentuated the impact of the shadow pandemic.

One of the women hit hard by COVID-19, is Maliheh.

Maliheh used to work at a workshop which shut down after the outbreak. Now, Maliheh has to stay at home in the poor south Tehran district of Shush. She has been battered every day by her husband since the first day of the lockdown. Her children, 3, 8 and 12, have also been abused by her addicted husband who used to be construction worker. Since he got addicted several years ago, he has abandoned all his family responsibilities, so Maliheh had to work to earn their living. After she was laid off, she is being beaten by her husband every day. (The state-run Donyay-e Eghtesad website – April 1, 2020)

Low income, lack of adequate savings and lack of resources to work from home, are causing tensions in families, and in addition to domestic violence against women, they have also put children at greater risk of abuse.

The general director of Social Harms Office at the Welfare Organization of Iran, Mahmoud Aligou, asserted that child abuse and domestic violence against women had been on a steep rise since the outbreak of the pandemic. “The middle class have taken the lockdown more seriously, so this sector is likely to have borne the brunt of violence (during this period),” he added. (The state-run Shahrvand news agency – April 2, 2020)

Earlier, the general director of Counseling and Psychological Affairs of the Welfare Organization of Iran, Behzad Vahidnia, had announced a threefold increase in the number of calls related to family disputes since the coronavirus outbreak. Vahidnia confirmed that about 60% of the calls were related to family problems. (The official IRNA news agency – March 31, 2020)

In these circumstances, women have no government support. Neither is there any authority to whom they could complain or any place where they could take refuge from their cramped and confined living conditions.

A women’s rights activist said, “Even under normal circumstances, there are no laws or mechanisms in place in Iran to protect women who are victims of domestic violence. Fear of infection, economic pressures, and the consequences of staying in a closed space for a lengthy period of time have exposed women and children to more violence than ever before. (The state-run Salamatnews.com, April 2, 2020)

Several children’s rights activists have expressed concern that child workers are being abused by their parents because of failing to earn their already small incomes as most people are staying home and there is hardly anyone on the streets to buy from them.

Yasaman Dadvar, a social worker helping children, says, “Some homes are very small. The parents and four children have to stay in 60m2 space. So, there is very little space for physical security. And there is also the fact that teenagers really need to be on their own for a few hours. But they don’t have that right now, and all these factors contribute to further violence.” (The state-run Shahrvand news agency – April 2, 2020)

In addition to the dramatic rise in domestic violence, the heavy workload on women during the crisis is another issue of concern to women’s rights activists. The mother works around the clock, cooking, cleaning and caring for other members of the family who are spending more time at home because of the lockdown.