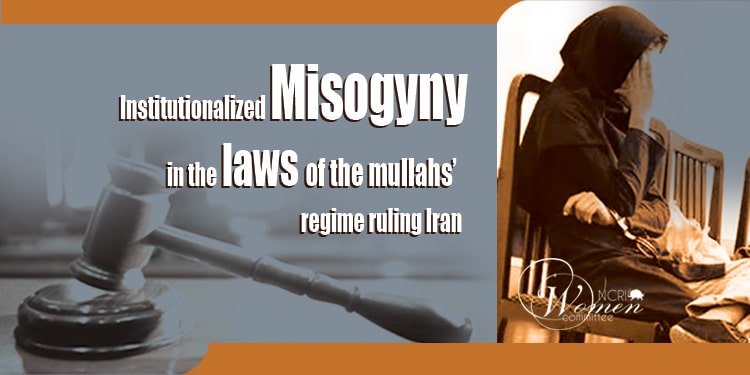 “Institutionalized Misogyny in the laws of the mullahs’ regime ruling Iran,” is the title of a document prepared by the Women’s Committee of the National Council of Resistance of Iran, which briefly studies the misogynistic laws of the clerical regime in Iran.

The so-called “Islamic” Republic regime has ruled Iran for nearly 40 years with its deviated, backward interpretation of Islam. From the outset of its rule, the regime was founded on subjugation, exclusion and humiliation of Iranian women.

The echo of Iranian women’s outcries during the anti-monarchic revolution could still be heard when on the eve of the International Women’s Day in 1979, Khomeini took the first step to clamp down on women by declaring that wearing hijab (veil) was compulsory for all female government employees. Government-backed club wielders and hoodlums went on rampage in the streets, yelling out the notorious slogan of “either the veil or a hit on the head” to humiliate and terrorize women and the public in general, paving the way for enforcement of the new dress code.

This brief review reflects only a drop from an ocean. An in-depth study of the misogynous laws of the medieval regime ruling Iran requires books.

All the laws of the clerical regime are filled with a hysterical enmity towards women, in education, clothing and covering, marriage, divorce, inheritance and in the segregation of buses and work places and etc. One can see the fundamentalist mullahs trying to turn back the wheels of history.

There are also many issues regarding homeless girls sleeping on cardboard boxes in the streets, runaway girls, women who have to resort to prostitution to feed their children, which we have not touched on.

“Institutionalized Misogyny in the laws of the mullahs’ regime ruling Iran” was first published in November 2015. It has been updated in May 2020.