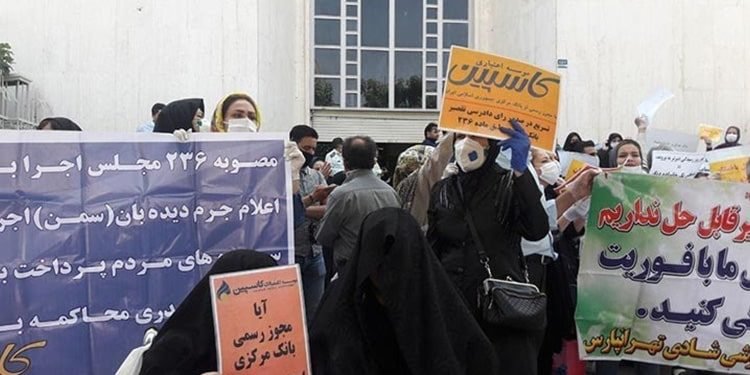 For the last three days (June 6-June 8), women have staged protests in Tehran, Tabriz, and Delfan. Women played an active role at the protest gatherings of clients who had been defrauded by the Islamic Revolutionary Guard Corps (IRGC)-backed Caspian Financial Institute and other financial institutions. Attending the protests were the Literacy Movement teachers in Tehran, nurses in the private sector in Tabriz, and a large number of residents from one of Delfan city’s villages in Lorestan Province, western Iran.

Clients of the Caspian Credit Firm – which is associated with the IRGC – held a protest rally outside a Tehran court on June 8 to protest against the company, which they said had plundered their life savings.

At the rally, investors robbed by fraudulent financial institutions Caspian, Arman Vahdat Financial Institute, Alborz Iranian, Afzal Tous Credit Institute, Samen al-Hojaj, and Talay-e Shadi, gathered to demand their money back. The robbed investors carried banners and chanted, “I will fight; I will die, but I’ll get my money back.”

Several teachers belonging to the Literacy Movement staged a protest in Tehran outside the Majlis (the mullahs’ parliament) on Sunday, June 7. They demanded that entrance exams for teachers’ universities be canceled.

The demonstrators, most of whom were women, had previously held similar rallies in the same area. They protested against the regime’s failure to fulfill the promises of years past.

“Given that we have been teaching for several years, and that some of us work as contract teachers, we should not have to worry about an entrance exam for the Teachers University,” said a participant in protest by Literacy Movement teachers. “The test for other groups – such as soldiers serving as teachers – has been waived. There should not be discrimination against educators,” the teacher declared. 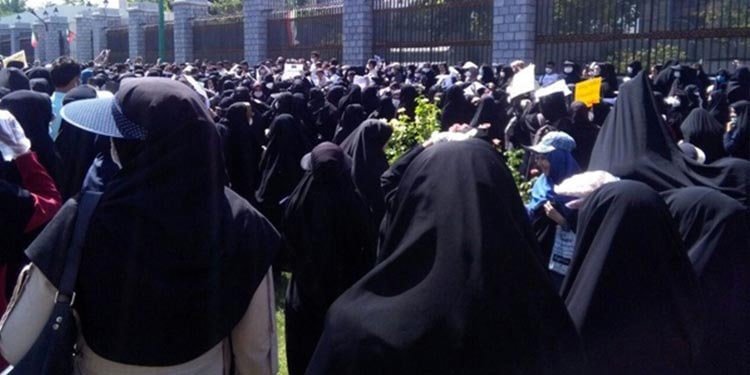 The Literacy Movement teachers have worked for years, in remote and rural areas, for the lowest wages. Some teachers have about 10 years of teaching experience. However, since last year, they have been asked to take entrance exams for teachers’ universities just to keep their jobs.

On June 6, a group of private-sector practical nurses gathered in Tabriz outside the East Azarbaijan Governor’s Office to protest their low salaries. Salaries paid to practical nurses are not in compliance with labor laws.

Most of these nurses hold Bachelor’s and Master’s degrees but work as crew and assistants.

“Because there are no jobs, we are being overly oppressed. Meanwhile, wages for contract or formal employees are two or three times higher than ours,” one of these women said.

In another protest, a group of women gathered outside the district headquarters of Delfan County in western Lorestan province. They protested operations of the Garrin Mountain Sand Factory. Villagers also protested the sand plant’s operations and the explosions it caused to extract sand. Protesters first gathered in front of the district headquarters, moving towards the factory, and succeeding in halting operations. 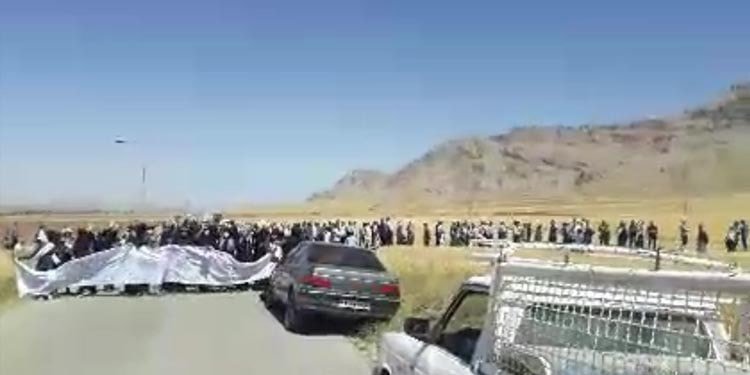