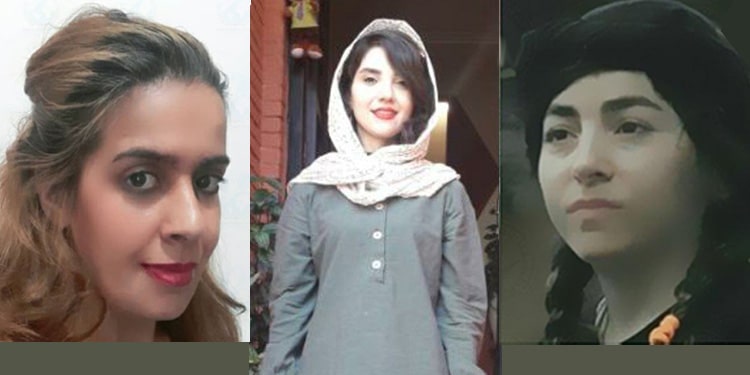 The clerical regime’s security forces have arrested another four female labor and social media activists over the past days.

Agents of the IRGC Intelligence in western province of Ilam arrested Khadijeh Mehdipour for her activities on the Instagram.

Agents of the IRGC Intelligence broke into her home on October 5, 2020 and arrested her. Khadijeh Mehdipour is presently detained in the general women’s quarantine ward in the Central Prison of Ilam. She does not have access to a lawyer and is deprived of her other basic rights.

Ms. Mehdipour was born in 1987 and resides in Ilam-e Gharb. She has lost both her parents and lives with her uncle.

Security forces also arrested Shabnam Ashouri at her home in Tehran on October 6, 2020. They ransacked the house and confiscated her personal belongings.

Shabnam Ashouri was born in 1987 and is married. She is the managing editor and producer of Agahnameh magazine which deals with issues and problems of Iranian workers.

Intelligence forces also arrested Neda Pir-Khezranian and Andisheh Sadri, two other social activists, in Tehran on October 6, along with two men.There is no information available on the whereabouts of the two detained female activists.

The continuous arrest of civil and social activists in Iran and those who have activities in the social media are part of the regime’s plans to crack down on women. Instead of fighting the pandemic, the Iranian regime has concentrated all its resources on repression of the society.

The international calls to free political prisoners in Iran has fallen on deaf ears. The regime continues to arrest more people and send them to prisons plagued with coronavirus.

UN High Commissioner for Human Rights Michelle Bachelet called on the Iranian regime authorities on October 6, 2020 to unconditionally release political prisoners and human rights defenders in the context of the COVID-19 pandemic.

The High Commissioner expressed her concern about the persistent and systematic targeting of individuals who express any dissenting view, and the criminalization of the exercise of fundamental rights.

Iran is the country most affected by COVID-19 in the region. Its prison system suffers from chronic overcrowding and poor sanitary conditions that have worsened during the pandemic, Ms. Bachelet added.