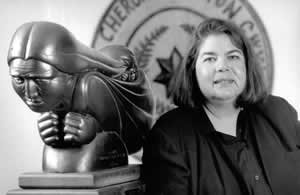 Her father was a full-blooded Cherokee and her mother was a Caucasian woman of Dutch and Irish descent who acculturated herself to Cherokee life. In 1942, during World War II, the United States Army exercised eminent domain for military purposes and took over the land of 45 Cherokee families, including the Mankillers, in order to expand Camp Gruber. The Mankillers willingly left Oklahoma under the Bureau of Indian Affairs’ Relocation Program. The family relocated to San Francisco in 1956, and later settled in Daly City. In 1977, Mankiller moved back to Oklahoma with her two young daughters, in hopes of helping her people. She began an entry-level job for the Cherokee Nation. She was elected in her own campaign in 1987, and re-elected again in 1991 in a landslide victory, collecting 83% of the vote. In 1995, Mankiller chose not to run again for chief, largely due to health problems. In March 2010 she was reported to be terminally ill with pancreatic cancer. She died of the disease at her home in rural Adair County, Oklahoma.