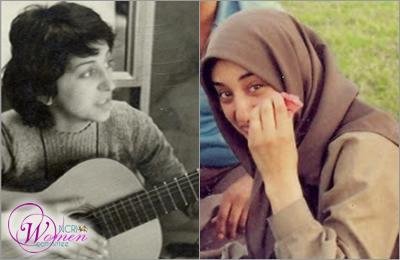 My sister Gity was 24 when she was executed in Iran

The second and third sequel in the Al Arabiya TV program “Hellish Era” was devoted to an interview with Mr. Behzad Naziri, member of NCRI Foreign Affairs Committee. He talks about the martyrdom of his sister Gity and his escape from regime’s prison and the arrest of his father.

Al Arabiya: Behzad has kept a few pictures of him and his sister Gity who was executed 40 days before the arrest of Behzad at age 24. Despite the passage of 30 years and his escape from Iran, the hardship in the prison and the sadness in his eyes looking at his sister are still with him. The story of revolution in Iran, before all else, is the story of Behzad and Gity.

Behzad Naziri: Khomeini began taking away the freedoms that were gained in the revolution. For example, women were very active in the Iranian revolution. We two were supporters of the People’s Mojahedin Organization of Iran (PMOI/MEK) at the time.

When the Iran-Iraq war began, my sister was sent as a reporter to the scenes and even to the war front. She prepared video clips and even held photo exhibitions in Tehran of the condition of the people who were hurt by the war. She was culturally very active and loved music. She was a poet. In February 1982, she was taken to the renowned Evin Prison. I was still a reporter at the time and when my sister was in prison I accompanied French reporters in various activities. Five weeks after the arrest of my sister, I too was arrested. I was arrested on 25 June 1982. My sister was executed in May 1982.

Forty days after the execution of my sister, when my mother was psychologically disturbed due to the execution of her daughter who was only 24, an arrest warrant was issued for me and I was arrested by the revolutionary guards and subsequently transferred to Evin Prison. Just five weeks earlier, I had been to this prison but as a reporter along with a team from a TV station.

I knew at that time that my sister, along with thousands of other prisoners were behind closed the doors and we could not see them. I saw one of the tortures that I had read about in the books.

There was this prisoner by the name of Shams-ed-din Moqadasi. I could not see him as I was blindfolded; I just asked his name. He said that he had been forced to drink a lot of water such that his stomach had bulged out. Then the revolutionary guards stepped on his stomach with their boots so that the water would come out while he was close to suffocation.

I escaped Khomeini’s prison after three years. They were relocating me for a medical treatment where they had to temporarily bring me out of the prison and I escaped. The Iranian regime arrested my father as a hostage. I quickly left Iran with the assistance of the resistance network and the PMOI. I went to Karachi in Pakistan via the Sistan and Baluchistan border.

Al Arabiya: Behzad Naziri was arrested in Tehran in 1982 when he was working for the Agence France Presse. He tries his best to tell the story of others and not his. He feels that they are the ones that can tell the story and thi reopens his wounds at every moment.

Behzad Naziri: It was in 1982 that the regime decided to showcase some prisoners for the reporters. At the time in France there were many stories of atrocities, massacres, executions and tortures in Iran’s prisons. The National Council of Resistance was established in Paris and Mr. Rajavi was in France. PMOI was very active in disclosing the atrocities of Khomeini.

Regime wanted to conduct a show for the reporters and portray as if nothing is happening inside Evin Prison; that everything is normal. So as a group of reporters from the French TV channel TF1 (TFone ) and Agence France Presse (AFP) we went to Evin Prison in February 1982. They showed us to halls in Evin Prison where we conducted interviews.

Someone by the name of Lajevardi, who later became known as the “butcher of Evin” and one of Khomeini’s most brutal and bloodthirsty elements was playing the role of prosecutor at that time. We interviewed him and he said: “Here, everything is normal. Prisoners come here for a period and receive training.” He showed us a group of young men whom he said were prisoners.

On page 953 of this book [of 20,000 Iranian martyrs] there is a picture of my sister in the Iran-Iraq war front. She was a reporter and was sent there with a group of people from Iranian National TV to prepare reports. Here is another picture of her, Gity Naziri at age 24. As you see, it is just one picture among many. Here there are pictures of just the employees of various departments and government organizations or NGOs. In this book I can see the pictures of many who were my friends who were with me in prison.

This is of course just 20,000 of the 120,000 that were executed by this regime during those years. This is my friend Mahmoud Bani Naj’jarian. Many of them were buried in unknown graves.

Here is Khomeini’s fatwa that says the PMOI, all its members and supporters, are Mohareb (enemy of God) and condemned to death. With this fatwa 30,000 were executed.

Of the 120,000 that were executed in those years, the names and particulars of 20,000 of them were gathered by PMOI’s social network. They are from various strata of the society. I will show this to you, including a picture of my sister, as well as many of my cellmates. One of them was a lawyer, another a student, another a former military man, one was a track and field champion, another was a simple laborer, one was a merchant from bazaar. They were all my cellmates.

I still remember all their names. These are glimpses of the crimes of those years and I am still carrying the scars of that on my body and in my heart. It is still new. My scars will heal only when the perpetrators of these crimes face justice.

Many of my cellmates never came out of the prison and were executed in the 1988 massacre when Khomeini slaughtered 30,000 PMOI members. Many were my friends, many of my friends.