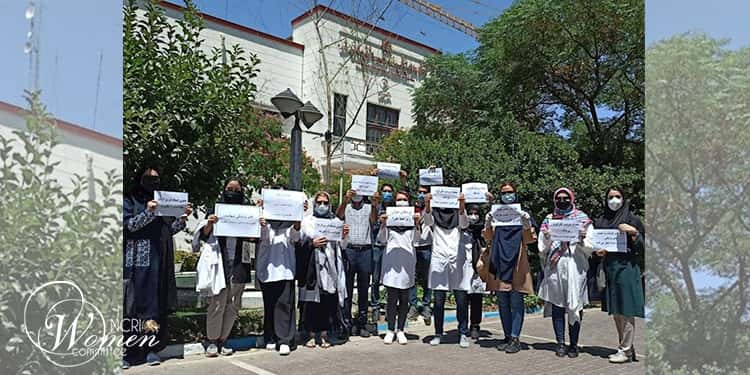 In a joint action on the morning of Sunday, August 1, 2021, different groups of doctors staged a nationwide protest. Doctors’ protests took place in Tehran, Shiraz, Hamadan, Kerman, Kermanshah, Khorramabad, Mashhad, and Yasuj with the slogan “Even if we perish and die, we will take our rights.”

Doctors protested against the harsh working conditions and the lack of job security in Tehran, Shiraz, Hamadan, Kerman, Yasuj, Kermanshah, Khorramabad, and Mashhad.

In Tehran, protesting doctors gathered across from the clerical regime’s parliament. In other cities, the doctors gathered outside the province’s University of Medical Sciences and Health Services branches.

Doctors held placards reflecting their protest of the inhumane treatment of doctors in the clerical regime and “captivity under the medical mafia.” They chanted: “Even if we perish and die, we will take our rights,” “Internship, internship, slavery law,” “Doctor without bread and sleep, strike, strike,” and “irresponsible officials are the cause of the status quo.”

The doctors’ protests are taking place as officials from the Ministry of Health warned against the sixth peak of the Coronavirus infection. The death toll from the coronavirus has reached 344,100.

In a letter to the mullahs’ supreme leader, Ali Khamenei, the Iranian Health Minister asked him to intervene. Saeed Namaki wrote: “We are crushed under the weight of a heavy wave of disease, and it is necessary to bring all the facilities of the country to a serious confrontation with this devastating phenomenon. The later we decide, the scale of the catastrophe will be wider.” (The state-run Moj news agency – August 1, 2021)

Also, on Sunday, August 1, depositors of the IRGC-backed Caspian Institute gathered in Saadat Abad, Tehran, to protest the looting of their property and assets. They say that after five years of looting with the official permission of the Central Bank, the total claims of the depositors have not been paid.

The defrauded clients of the Cryptoland exchange office also gathered in front of the Economic Crimes Court on Sunday, August 1, following their previous protests.