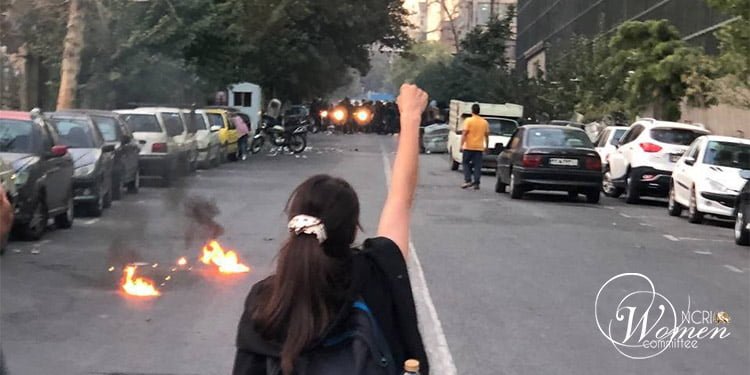 On the fifth day of Iran protests after the unjustified murder of Mahsa Amini, new cities and universities joined the anti-regime protests. In western Iran, the cities of Kurdistan have seen the deaths of more young people, including women, as the mullahs’ repressive forces ruthlessly opened fire on the protesters.

The unjustified murder of Mahsa Amini has sparked a chain of angry protests all across Iran.

People are rising up for freedom and regime change and venting their anger and frustration at the mullahs.

More women among those killed or wounded

According to the videos shared on social media, an elderly woman by the name of Hajar Abbasi, 60, was shot and killed in Mahabad, Kurdistan. A young woman was shot and apparently killed in Kerman.

Kurdish media have reported 43 women, 24 children, and adolescents under 18 wounded during the uprisings.

At least three young men were killed, and 221 persons were wounded.

At least 250 Kurdish citizens have been arrested in 14 cities.

Fearless women and youths fight on

More young women are being violently arrested for taking off their scarves as an act of protest. Nevertheless, the Iranian youth and women are fearlessly confronting the State Security Force.

The fifth day of the protests saw more SSF vehicles and motorcycles burnt, and the agents attacked and pushed back by courageous youths in Tehran, Rasht, Kerman, and other cities.

One of the most important developments of the fifth day of the protests, September 20, 2022, was the merchants’ strike in the Tehran Bazaar. They joined the protest strike started on September 19, by the shop owners in Iranian Kurdistan.

The strike by Tehran Bazaar merchants had a significant impact on the regime during the 1979 Revolution.

More cities join on the fifth day of Iran protests

Women were fearlessly at the forefront of all protests, participating in all acts of defiance, leading the chants, and even confronting the security forces by hurling stones or turning over their cars and torching their motorcycles. Their voices can be heard loud and clear, passionately crying out anti-regime slogans or confronting the Morality Police agents.

The protests initially sparked by the unjustified murder of Mahsa Amini quickly spread to take up a litany of grievances, calling for an end to the so-called Islamic Republic of the mullahs according to the videos shared on social media by protesters in Iran.

Wary of the student protests, Mohammad Moghimi, the president of Tehran University announced that in-person classes will start in the third week of October and the courses will be virtual in the first two weeks of October. The official news agency IRNA had quoted him on September 18 that classes must be held in person.

Popular slogans target the regime and the mullahs

On the fifth day of Iran protest, the most common slogans chanted in every city, university, and street were “Death to the dictator”, “Death to Khamenei” and “I will kill whoever killed my sister!”

People also chanted other slogans, including “We fight and die, but will take back Iran”, and “Down with the oppressor, be it the Shah or the [mullahs’ supreme] leader!”

I extend my salutations to the martyrs of the uprising in Iranian #Kurdistan. The names of those who lay down their lives for freedom are eternal in #Iran.

I urge the courageous youths to rise up to commemorate the martyrs and assist their families. The current UNGA session should hold Ebrahim Raisi, the henchman of #1988Massacre, for four decades of massacres.

I urge our dear youths to rush to aid those wounded during the uprising. I ask the honorable and freedom-loving nurses and doctors to treat them away from the eyes of the repressive forces. Do not let them fall into the hands of the IRGC, SSF, and MOIS mercenaries.

The courageous Iranian women and youths stand firm, showing that the people of #Iran will not remain silent, and they are determined to overthrow the mullahs’ evil regime.

In another thread, she pointed out:

People are rising up for freedom all across #Iran, in the capital, and from West to East, and North to South.

In Tehran, the cries of “Khamenei will be overthrown this month,” and “the regime is the main target” have shaken the pillars of the mullahs’ regime.

The courageous Iranian women and youths stand firm, showing that the people of #Iran will not remain silent, and they are determined to overthrow the mullahs’ evil regime.

Immediately, after the unjustified murder of Mahsa Amini, Mrs. Rajavi called for public mourning and urged Iranian women to embark on nationwide protests. She called for the disbandment of the regime’s savage Guidance Patrols.