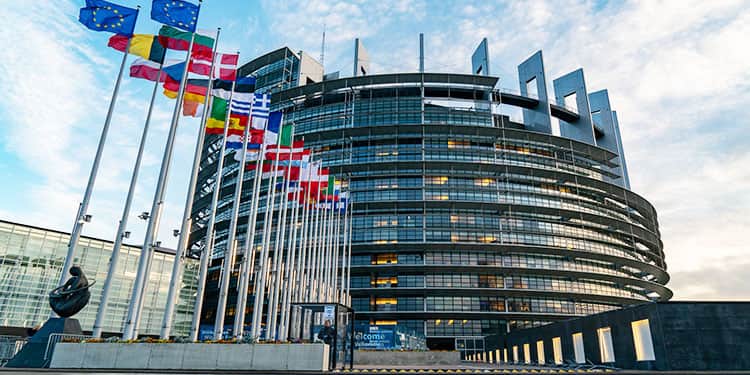 The European Parliament adopted a strongly worded resolution on Thursday, October 6, expressing support for the “young Iranian women leading and participating in the protests despite the difficulties and personal repercussions they are facing.”

The European Parliament condemned the death of Mahsa Amini in Iran and asked for EU sanctions against her killers and those involved in suppressing the ensuing protests.

In the resolution, the European Parliament:

1. Deplores the death of Mahsa Amini and extends its condolences to her family and friends; calls for a prompt, impartial, and effective investigation into her death by an independent competent authority in cooperation with international organisations;

2. Expresses support to the young Iranian women leading and participating in the protests despite the difficulties and personal repercussions they are facing; strongly condemns the violence and discrimination against women in Iran and deplores that women are obliged to wear a veil against their will on pain of violent reprisals or even death; calls for an end to discriminatory laws and clothing requirements for women in Iran, including the mandatory hijab;

3. Strongly condemns the violent crackdown by the Iranian authorities against protesters; regrets the resulting loss of life and that people were injured while protesting and extends its condolences to the victims and their families; calls on the Iranian authorities to refrain from using disproportionate force against peaceful protesters and stresses that all the serious allegations of violence against protesters must be thoroughly and independently investigated;

4. Calls for the release of all arrested protesters, as well as of all unlawfully detained human rights activists, journalists and other prisoners of conscience in Iran and calls for all charges against them to be dropped; reiterates its support for the aspirations of the Iranian people who want to live in a free, inclusive and democratic country, which respects its national and international commitments on human rights and fundamental freedoms;

6. Calls on VP/HR Josep Borrell and the European External Action Service to publicly denounce the repression against women, human rights defenders as well as minorities in Iran and to call for the release of the arrested European citizens and peaceful Iranian protesters; recalls that respect for human rights is a core component for the development of EU-Iran relations and calls on VP/HR Borrell to stress that any improvement in economic relations with Iran is conditional on the end of Iran’s serious human rights abuses;

7. Condemns the internet disruption and censorship by the Iranian authorities as part of their crackdown against the protests; welcomes the activation of Starlink in Iran and the US decision to allow private companies to offer uncensored internet access to the country during the current protests; urges Member States and European companies to take similar steps to facilitate internet access in Iran;

8. Reiterates its strong condemnation of the steadily deteriorating human rights situation in Iran, including and especially for persons belonging to ethnic and religious minorities due to systematic political, economic, social, and cultural discrimination;

9. Calls on the Iranian authorities to eliminate all forms of discrimination against persons belonging to minorities, whether officially recognised or not, and to respect ethnic and religious minorities’ fundamental rights and freedoms including freedom of conscience and to exercise their full rights on an equal basis with all citizens;

11. Expresses grave concern about the situation of Ahmadreza Djalali, Vahid Afkari and all others unlawfully imprisoned in Iran; reiterates its call for their unconditional release and for all charges against them to be dropped; demands that the Iranian authorities ensure that the rights of prisoners and those arrested are protected at all times, including their ability to receive adequate medical care and full access to their families and lawyers of their own choice; reiterates its calls on Iran to grant requests for visits from representatives of international organisations; calls on the Iranian authorities to stop threatening Ahmadreza Djalali’s family in Iran and Sweden;

12. Strongly condemns the IRGC’s unprovoked attack in Iraq’s Erbil Governorate and stresses that such indiscriminate attacks threaten innocent civilians and the region’s stability; underlines the Iranian regime’s destabilising role throughout the region and denounces the fact that the regime is responsible for the deaths of hundreds of thousands of civilians in Iran, Syria, Yemen and Iraq; strongly condemns Iran’s cooperation with Russia and the fact that it is supplying for the Russian war against Ukraine;

13. Expresses its dismay and deep concern that the Commission may have financed or co-financed campaigns trivialising the wearing of the Islamic veil, including the Council of Europe campaign co-financed by the Commission which stated that ‘beauty is in diversity as freedom is in hijab’; urges the European institutions to not finance any future campaign that may promote the Islamic hijab or put pressure of any kind on Muslim women and girls to feel obliged to wear it;

14. Welcomes the Council’s adoption of the EU Global Human Rights Sanctions Regime (EU Magnitsky Act) as an important instrument for the EU to sanction violators of human rights; calls on the Council to impose sanctions in response to serious human rights violations, including acts of repression, the monitoring of telecommunications and all violations against Iranian civilians;

15. Calls on the Council to prepare targeted measures against Iran’s Morality Police, whose officials were involved in the death of Mahsa Amini, and who have committed serious human rights violations against protesters, been responsible for executions and arbitrary detentions of dual and foreign nationals in Iran, and against judges who have sentenced journalists, human rights defenders, political dissidents and activists to death; calls for Member State ambassadors to Iran to be recalled; reiterates that sanctions against the IRGC leadership must not be lifted;

16. Calls on the VP/HR to suspend all negotiations on the JCPOA in the light of the findings of the IAEA probe and Tehran’s hostile conduct in the region and globally;

17. Calls for an independent investigation into the role of Ebrahim Raisi in crimes against humanity of murder, enforced disappearance and torture;

18. Instructs its President to forward this resolution to the Council, the Commission, the European External Action Service, the Vice-President of the Commission / High Representative of the Union for Foreign Affairs and Security Policy, the governments and parliaments of the Member States, the Supreme Leader of the Islamic Republic of Iran, the President of the Islamic Republic of Iran, the Members of the Iranian Majlis and the family of Mahsa Amini.