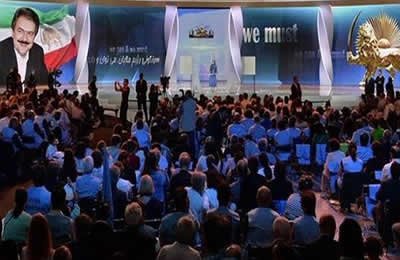 True voice of Iranian people heard in Paris on Saturday

The largest gathering of the Iranian Resistance was held In Paris on Saturday with over 600 legislators and distinguished political figures from various political affiliations and prominent jurists attending the event.

She said: “The people of Iran neither want nuclear weapons, nor meddling in Iraq, Syria or Yemen, nor despotism, torture and shackles.

Mrs Rajavi made it clear that despite the despotism of the Iranian regime, the Iranian people remained unbowed.

She added: “Look at Iran as it has risen up today. It is inflamed and seething despite 1,700 executions during Hassan Rouhani’s tenure.

“Look at today’s Iran. Do you see any Iranian not discontented or not wanting change? The 15 million deprived and destitute citizens languishing in shanty towns in the suburbs, the 10 to 15 million young people who cannot find jobs and the millions of families feeling the heavy burden of high prices, all of them, demand major change.”

Mrs Rajavi said “all signs” now pointed to the end of the rotten Iranian regime, which she blamed for spawning ISIS.

She said: “Today, Western policy-makers stress that ISIS and Bashar Assad are the two sides of the same coin. I add that the caliph in Tehran is the godfather of both of them.

“The fact is that ISIS emerged out of the atrocities perpetrated by Bashar Assad and [former Iraqi Prime Minister Nuri] Maliki committed on orders from the clerical regime.

“I therefore call upon Western governments to refrain from taking sides with the Tehran regime.

“In Iraq, do not collaborate with the regime’s Revolutionary Guards Corps and the so-called Shiite militias who are a hundred times more dangerous than the other henchmen.

“The solution in Iraq is to evict the mullahs’ regime forces, to empower Sunni power-sharing, and to arm the Sunni tribes.

“The solution in Syria is to evict the Iranian regime’s forces and to support the people of Syria in overthrowing Assad’s dictatorship.

“The solution in Yemen is to stand up to Tehran, as the Arab coalition has already done. This must be pursued until the regime is uprooted all across the region.

“Indeed, the solution is to evict the Iranian regime from the entire region and to topple the caliph of regression and terrorism in Iran.”

Mrs Rajavi was equally clear on the US-led bid to stop the Iranian regime from developing a nuclear weapon, stating an agreement should only be signed if Tehran agreed to dismantle its bomb-making plants.

She said: “The Iranian people and resistance will not accept any agreement that does not dismantle the regime’s bomb-making infrastructure.

“UN Security Council resolutions must be implemented fully. Uranium enrichment must be halted completely. And the regime must provide answers to the military dimensions of its nuclear project and make its nuclear experts available for IAEA questioning.

“P5+1 leaders, if you do not want a nuclear-armed fundamentalist regime, stop appeasing it.

“Do not bargain over the human rights of the Iranian people, and recognize their organized resistance which is striving for freedom.

“You are gravely mistaken in thinking that there is no solution. There is a solution for ending the mullahs’ nuclear weapons program: regime change by the Iranian people and resistance.”

Amid calls of “we can and we must” from the audience, Mrs Rajavi said the resistance must now also “ensure freedom of choice for each and every” Iranian.

“We believe in equal rights for all ethnic and religious minorities and a society devoid of torture and executions.”

Mrs Rajavi concluded her speech by addressing Iranians inside Iran and abroad.

“The fight belongs to you and your struggle,” she added. “May victory be yours.”