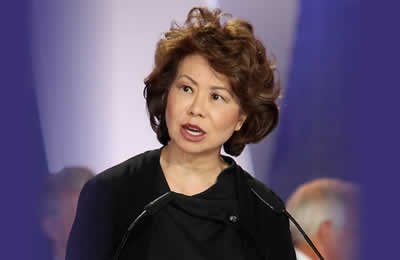 Elaine Chao, a former U.S. Secretary of Labor, was among over 600 political leaders and dignitaries that attended the recent major gathering of the Iranian opposition in Paris.

Mrs. Chao expressed her support for ‘those who desire democratic change’ in Iran. She particularly emphasized on the need to fight against the repressive policies of the Iranian regime against women and girls.

It’s a rare opportunity to be here, to join my colleagues from the United States and also around the world to express support with those who desire democratic change and fundamental freedoms to the people of Iran.

In particular, I want to talk about the women and the children and the young girls of Iran. Their aspirations, the aspirations of Iranian women and girls who have borne the brunt of the current regime’s most repressive policies must be heard.

You know, in the last 50 years women from civilized nations around the world have experienced a revolution in educational and economic opportunity. More women than ever before have obtained an education, entered the work force, making significant contributions to their family and also society.

When I was Secretary of Labor I worked with the First Lady, Laura Bush, who led many initiatives to support the educational and civic aspirations of women and girls throughout the Middle East.

To name just a few projects, we provided uniforms for girls so they could go to school, skills training such as IT, and entrepreneurialism for war widows. We also encouraged civic participation by setting up classes in democracy and leadership training for women.

To inspire these women we highlighted the fact that in 2004 women comprised half of all presidential appointments at the U.S. Department of Labor, the highest of any cabinet department.

But while discrimination against women have been outlawed in other countries, Iran has been legalizing it.

While other countries are empowering women, Iran has been penalizing them.

Recent reports reveal that newly imposed quotas, restrictions and prohibitions are curtailing the access of Iranian women to higher education.

Women are prohibited from studying high earning professions such as medicine, engineering in universities across Iran. Quotas have been installed limiting the ability of women to earn graduate university degrees.

And universities have declared as many as 77 fields of study off-limits to women, a policy that is allowed and encouraged by the current Iranian regime.

It’s also not surprising that many of the images seen in the West during democratic protests in Tehran prominently featured young Iranian women. Today the women of Iran need to receive this message: we see you, we hear you, and you are not forgotten.

As mentioned, there are daunting challenges confronting women and girls in Iran today. Legal codes limit and control almost every aspect of women’s lives from how they dress, to whom they can marry, to their ability to make a living outside the home. But ultimately these regressive forces will not succeed.

The advancement of women in society is one of the most powerful developments sweeping the world today. And if history teaches us anything, it is that no regime, however repressive or brutal, can stand against fundamental reforms forever.

So that is why those of us, and in this tremendous hall, who value liberty, must continue to fight these repressive policies with our witness, with our resources, and with our action.

Thank you so much for what you do