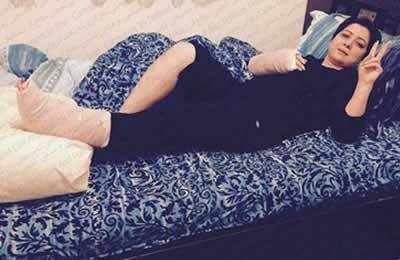 The news has just got out that Negar Haeri, a lawyer and former political prisoner, was deliberately ran over by unidentified persons on December 17, 2015.

She had previously been threatened time and again and finally on December 17, she was chased by a black Peugeot 405 with dark windows and hit after she got out of her car in Shahrara district. The Peugeot then sped away and disappeared.

Ms. Haeri was subsequently transferred to hospital. She suffered a broken right arm and a broken left leg and bruises all over her body.

Ms. Haeri had been summoned on phone to Evin’s Prosecutor’s Office on May 18, 2015, where she was insulted and arrested in front of her mother. She was held in the Evin’s women’s ward for one day and transferred to solitary confinement for another nine days where she was interrogated under torture. She was ultimately released on May 27, 2015.

Before this, she spent eight months in Varamin’s Qarchak prison and was released only after much efforts and on a 2billion-touman bail.

Ms. Haeri’s license for law practice was annulled and she was not banned from giving legal advice to her clients. Security and intelligence officers have instructed her not to leave Tehran in any circumstances.