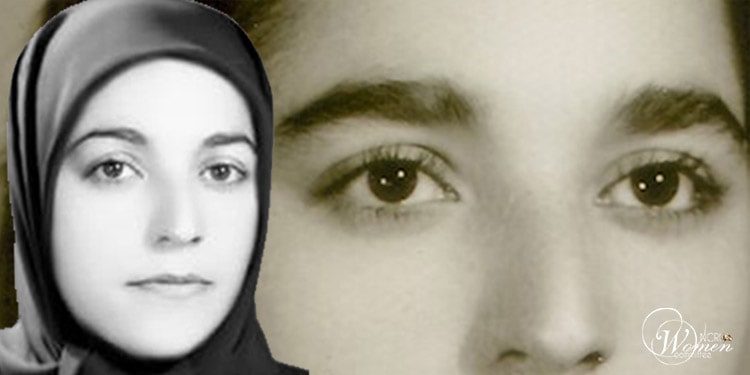 Ashraf Sadat Ahmadi was born in Tehran in 1941 and finished her high school education there. She was the mother of four. Her daughter Maryam was born in prison under the Shah’s regime and she was also imprisoned during Khomeini’s reign, when she had a newborn son.

Ashraf started her political activities against the Shah’s regime in 1971. She would visit her imprisoned brother, a member of the People’s Mojahedin of Iran (PMOI/MEK), and help exchange news. She also participated in sit-ins and demonstrations organized by the families of political prisoners. Ashraf chose her path for freedom despite having a family and children. Fatemeh Amini, the first female PMOI martyr, had great influence on Ashraf and helped her learn about the PMOI and love its freedom-loving goals.

Ashraf was arrested in 1975 and sentenced to 15 years in prison. Since she supported the Mojahedin and was in contact with them, the Shah’s secret police (SAVAK) subjected Ashraf to severe tortures despite suffering from a heart disease and being pregnant.

After the PMOI suffered heavy blows in 1971 from the Shah’s SAVAK, Ashraf remained in contact with Fatemeh Amini and participated in all the activities of the families of imprisoned PMOI members to expose the Shah’s crimes against them.

Enduring under torture was one of the lessons she learned from Fatemeh Amini. Despite the considerable information she had from PMOI members, she did not say anything under torture and SAVAK interrogations. So, she became an icon of resistance and endurance for other political prisoners.

After the 1979 Revolution and freedom from prison, she stepped up her activities with the PMOI. So, she was arrested again in 1981 with her newborn son.

Ashraf spent 7 years in prison and was executed at the age of 47 on July 31, 1988 in the massacre of 30,000 political prisoners by the clerical regime.

Ashraf’s cellmates have recounted many memories from her. Following are excerpts:

“She was very calm and spoke softly. She smiled often and would spread hope and kindness to those around her. Other prisoners knew her as a mountain who was dependable in any situation. Ashraf tried to keep the flame of resistance alive against all odds…”

“Ashraf was our source of hope and our experienced guide in prison. In addition to her heart disease, she had contracted kidney disease in prison, but she would still defy the torturers. Ashraf would go and visit prisoners who were being taken for execution. No one knows what she told them, but they were all calmer and happier after talking to Ashraf.”

“One day Lajevardi (the butcher of Evin prison at the time) told Ashraf that she had to give away her baby son. That night, the Revolutionary Guards attacked the ward and tried to take away Ashraf’s son. They were trying to bring the baby out of his mother’s arms, while the baby was crying and asking for his mom. It was a harrowing scene as Ashraf was trying to hold on to her son. The guards eventually took the baby away.”

“When I was in Qezel Hesar prison, I heard about a mother of four in Evin prison, with heart disease, who was a former political prisoner from Shah’s time. Her only crime was that she used the forbidden term, “Mojahedin”, in referring to the regime’s opposition (whereas the regime uses the term hypocrite). Once she was called for interrogation. In reply to Lajevardi’s question, she said that her name was Ashraf Ahmadi and she was a Mojahedin (PMOI) sympathizer. Lajevardi asked in objection, “Do you still call them ‘Mojahedin’?” Ashraf replied “They were called by this name till I was arrested. If their name has changed afterwards, I have no knowledge!”

Having experienced interrogation during the Shah’s era, Ashraf helped many female prisoners with advice to not let the interrogators extract information from them. Lajevardi, Evin’s main prosecutor, was aware of this and assigned a spy to report to him on whoever was in close contact with Ashraf. Anybody who was caught would face grave consequences.

Ashraf refused to reply to questions during the interrogations. She did not even appear in the court and had no convictions.

In Evin prison, Lajevardi occasionally held some meetings at a hall called Hosseiniyeh and forced the prisoners to attend, but Ashraf did not even participate in a single meeting. When this was reported to Lajevardi, he replied: “Leave her alone, she is crazy.”

In 1987, when Ashraf was passing the final months of her prison sentence, her husband was killed in a car accident and her four children were left alone without anyone to take care of them. This was a very difficult situation for her, but it could not stop Ashraf from defending her humanitarian goals.

The revolutionary guards took Ashraf’s belongings to her mother’s house after three months and gave her the news of her daughter’s execution. Her place of burial was never disclosed to her family.

One of Ashraf’s brothers was executed in 1975 under torture by the Shah’s SAVAK. Another of her brothers, Ali Ahmadi, was killed during a missile attack on Camp Liberty in Iraq.