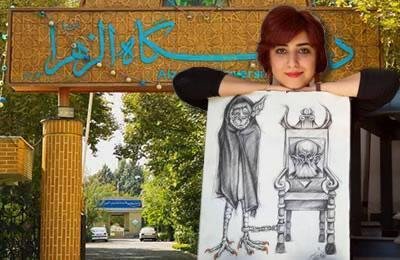 Iran: Atena Farghadani would rather go to jail than succumb to regime

Former Iranian prisoner of conscience Atena Farghadani in an open letter declared that she would continue her artistic activities despite the regime’s intimidations.

“I would not mind going to jail and to solitary confinement,” she said.

Ms. Farghadani, a cartoonist and a children’s rights activist, was arrested and jailed in December 2014 for drawing a cartoon critical of the Iranian parliament. She was released last month under international pressure.

Atena Farghadani wrote in her open letter: “As long as I live, I will stay in Iran and I would not going to jail and solitary confinement! … For me the best and the most beautiful are summed up in the word of motherland.”