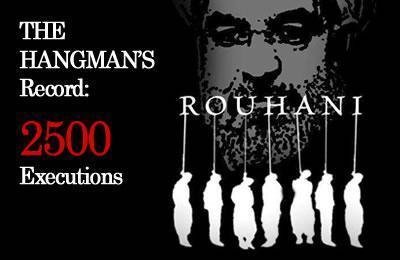 Three years on, has anything changed for Iranian women?

June 15, marks the third anniversary of the so-called election of Hassan Rouhani as president of the clerical regime in 2013.

For the Iranian opposition and resistance, Rouhani’s election translated into a rocket attack on Camp Liberty, where members of the opposition PMOI reside in Iraq. A woman (Kolsum Serahati) and a man (Javad Naghashan) were killed as a result of this attack, dozens were wounded.

One and a half months later, on September 1, 2013, just as the mullahs’ negotiating team was heading to Geneva for the nuclear talks, another vicious attack on the opposition claimed another 52 lives in Ashraf (Iraq) including six women. Seven residents of Ashraf, six of them women, were taken hostage and no information is available on their fate to-date.

Rouhani has thus taken precedence over his predecessor, Mahmoud Ahmadinejad, in his savagery against the opposition, a fact that is telling enough about his moderation since a distinctive sign of moderation for any government is treatment of its opposition and toleration of dissent.

Women are arrested and detained for protesting the government policies and also because of their faith. Their conditions have not improved under Rouhani, but gotten worse. They are deprived from badly needed medical treatment as a means of gradual killing of the prisoner. Maryam Akbari Monfared, Zeinab Jalalian, Sedigheh Moradi, Nargess Mohammadi, Reyhaneh Haj Ibrahim, Qadrieh Qaderi, and Safieh Sadeghi, are to name a few of the prisoners who are suffering from serious illnesses in the Iranian regime’s jails deprived of treatment.

Women of dual nationalities have also been detained and imprisoned under Rouhani, the latest being Nazanin Zagheri (British-Iranian) and Homa Hoodfar (Canadian-Iranian).

Rouhani is also a record holder on executions in Iran. 2,500 executions, mostly of young men including juveniles, and 68 women, also top Rouhani’s record. As the clerical regime carries out most executions in secret and does not reveal the identities of its victims, there is no exact information available on all of them, but one case made history.

The execution on October 25, 2014, of Rayhaneh Jabbari, the 26-year-old interior designer who had defended herself against rape by a senior Intelligence Ministry official, demonstrated not only the regime’s savagery and injustice under Rouhani but the Iranian women’s courage in standing up to such injustice.

Nothing has changed for better for Iranian women as regards the compulsory veil. Actually, Rouhani wrote in his own memoirs that as Khomeini’s representative in the Army’s politico-ideological bureau, he was the one who initiated enforcement of veil in the offices of the Armed Forces and he personally went to all the offices to make the veil mandatory for all women.

According to official reports, in a matter of only one year under Rouhani, the regime’s agents confronted 3.6 million so-called improperly veiled women on the streets and put 18,000 of them on trial. And yet a new Moral Security Police was launched on April 3, 2016, featuring uniformed plus 7,000 plainclothes agents to monitor the women who drop or loosely wear their veils behind the wheel and in public, or otherwise do not observe the dress code.

The mullahs’ parliament passed a bill in August 2015 sanctioning the arrest, imprisonment, fining and impounding the cars of women who do not wear the veil while driving.

The most shocking hallmark of Rouhani’s tenure with regards to the “veil” was the wave of government-incited acid attacks in 2014 which terrified Iranian women and took a large toll on them. Rouhani’s government officials admitted that there were at least 400 cases of acid attacks on women, with no culprits arrested.

More recently, the arrest and flogging of 35 young men and women in a graduation party in Qazvin on May 26, 2016, shocked the world. The new graduates were flogged the next day, 99 lashes each. And yet, the trend of arrests and floggings continue every night and day since across the country.

This is in addition to medieval punishments of amputation of hands and gouging of eyes that have continued to be practiced under Rouhani.

As for women’s education, the percentage of girls’ admission to universities has dropped from 48.2 percent in 2012, the last year of Ahmadinejad, to 45.5 percent in 2015 according to the data published by the official Iranian news agency, IRNA.

In 2014, some 47 universities rejected female students in various fields and the number of gender-based majors reached 215. The Iranian parliament passed in December 2015, Article 5 of the bill on Evaluation and Admission of Students for Complementary Education, emphasizing that the quotas limiting the number of women and the fields they can study, in the higher education system are still valid.

Actually, the ruling clique is opposed to education of women and sees it as the cause for the growing divorce rate in the country.

Depriving Bahaii students from education has also continued under Rouhani and every day there is news of expulsion of a new Bahaii girl from university.

There are not enough jobs for anybody in the country and Rouhani has not been able to do anything to improve the job market in general. The Iranian parliament, however, put further restrictions on women’s employment by passing the bill of “protecting hijab and chastity” on January 3, 2016. Item 5 of this new bill limits women’s employment to businesses that have segregated work environment and women can only work from 7 am to 10 pm.

The next bill passed on February 1, 2016, was called “the bill to reduce the working hours of women who have special conditions”. Rouhani’s deputy for Women and Family Affairs admitted that the bill would result in gradual elimination of women from the workforce.

The government also ordered in 2014, to allocate only 16 of 2,700 job opportunities to women. The latest official figures announced for unemployment of young women under 30, is a shocking 85.9 per cent.

Other restrictions on women’s singing in public, entering sports stadiums, posting unveiled pictures on the internet, bicycling in public, etc. as well as forcible marriage of underage girls and women’s inequality in marriage rights continue to persist under Rouhani.

All together, these factors have led to draconian ills in Iranian society, such as rampant poverty among women, widespread prostitution among female breadwinners and single heads of the household, and have unfortunately driven large numbers of women to addiction and suicide.

The facts attest that Rouhani is not a moderate mullah, but just a more presentable mask for a religious fascist regime seeking to prolong its rule. Iranian women have not been deceived by Rouhani, and they have continued to defy the regime by their various forms of protest. They are the force for change and the ones to topple the clerical regime.