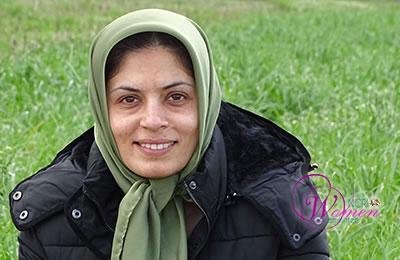 Mahnaz Sa’eidi: I am bereaved but confident of victory

The hot summer days remind me of the summer when I last visited my mum.

Those days, I was a little girl all of whose emotions and dreams were tied to the loving gaze of her mother.

My name is Mahnaz Sa’eidi, and my mother’s name was Roghieh Akbari Monfared.

She was one of the thousands of women murdered by the mullahs’ evil regime in the massacre of political prisoners in 1988.

I still remember those days when in the end of every visit in prison, when my mother had to go and I had to be deprived of seeing her for some time, I used to keep staring at her and never turned my head until the last possible moments before she disappeared behind the wall.

Every time, before she got to the end her way, she turned around and kindly looked back at me to bid me farewell. Then she raised her hands and held them together in front of her face.

It is a fact that our generation has had to make many difficult choices and numerous fate-making decisions. And all those moments, I believe, can be summed up in a pledge.

The pledge to free our people and our motherland…

This pledge bears a profoundly admirable meaning for me, as it has been upheld with the blood of three of my uncles and my mother.

And today another uncle of mine and my aunt (the resistant prisoner Maryam Akbari Monfared), continue to persist on the same pledge in the depths of the clerical regime’s dungeons.

One of my uncles was executed in 1981, another in 1985, and my third uncle was executed along with my mother in 1988 in the course of the massacre of political prisoners. Those days, Khomeini thought he executed over 30,000 prisoners. However, I think by doing so, he tied the noose over 30,000 times around his own neck.

I am bereaved and my heart bleeds for these losses. At the same time, there is voice within that tells me that we will definitely win. And the day of victory, is a day when all those who sacrificed their lives for the cause will be smiling…