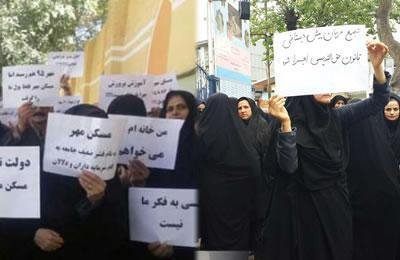 Friday, October 7, 2016, a group of women who had applied for housing, staged a rally outside the Governor’s office in Mashhad, capital of the northeastern Province of Khorassan Razavi.

They protested against the officials’ unaccountability and hollow promises on the delivery of the houses they had bought.

In their gathering, the women chanted slogans against Rouhani’s government and its failure to provide them the houses they had bought.

On Thursday, October 6, 2016, a group of pre-school teachers held a protest outside the Governor’s Office in Rasht, capital of the northern Iranian province of Gilan. They demanded to be officially employed.

Pre-school teachers have staged a number of protest demonstrations since last year, but have not received any positive responses from the government. These women have to live on very small wages.