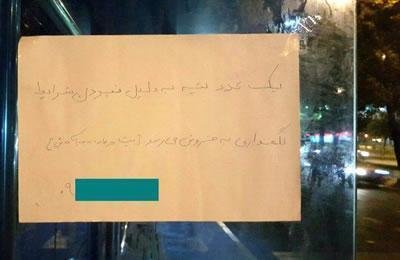 “Due to unsuitable conditions of caring for the child, an infant is offered for sale (20 days before being born).”

The shocking ad was posted in a bus station in Tehran’s Azadi Avenue.

The state-run BORNA news agency wrote on October 25, 2016: “The infant is going to be born in 20 days, but his/her mother is not preparing for her child’s birth, rather she wants to sell it in advance. This is the fate of children who are born to impoverished women who sleep in cardboard boxes in the streets.

“Homeless women go to the hospitals in south and central Tehran and give birth to their babies. They usually sell their babies for 100 or 200 thousand toumans after they are born.

“Rouhani’s deputy for women and family affairs had announced that the number of unborn babies sold by their mothers has been on the rise.

“There is no accurate figure on the number of babies sold in their mothers’ womb, but the number is large enough to make headlines in the cyberspace.”