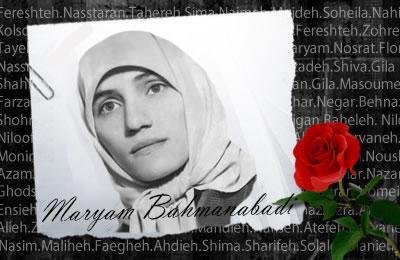 Example of steadfastness at any cost

In 1983, Maryam was transferred to a cage in Unit One of Qezel-Hessar Prison in Karaj, on the orders of Haj Davoud Rahmani, the prison’s warden.

The cages in Qezel-Hessar’s Unit One were designed to break the resistant prisoners. They were supposed to sit blindfolded and facing the wall for hours in a place, the size of a cage. Prison guards stood over the prisoner’s head ready to flog the prisoner if she made any extra movement. Even if the prisoner’s spoon hit the plate and made a noise while eating lunch, the guards would flog her.

After serving the period of imprisonment in the cage, Maryam suffered from arthritis and severe back pain. All of her bones including her fingers and toes, backbone and discs had become so painful that she was not able to walk any long distance and had to sit down after a short walk.

About her days in the cage, Maryam used to say, “Every day, when I got up, I told myself that if I did not endure the hardship and heat of the cage, I had to collaborate with the filthy regime. Then, how would I tolerate the Hell in my conscience. Then, someone else would be sitting in my place.”

The inmates detained in the same ward as Maryam, remember her high spirits and her loud laughs. One of her cellmates said, “When she came from the cage, I did not know her, yet. In a short time, however, she became very popular among the prisoners as if we knew her for years. She was present always and everywhere. She had the power to resolve any problem. She always volunteered for hard work.”

In 1984, after returning to the general ward from the cage, she was transferred back to Evin for further punishment and torture. The scars of torture were evident on her back and waist. She was held incommunicado for two months, and were compelled to grant her a visit only after her mother insisted so much on visiting her. Then, Maryam was taken on a wheelchair to visit her mother. She told her mother that she had been given serums through IV because of her poor health after severe tortures. After this, she was prohibited from having any more visits.

Maryam was a resistant prisoner and she was finally executed during the massacre of political prisoners in 1988. Before executing her, prison guards hanged her brother in front of her eyes.

Maryam’s steadfastness and refusal to give into pressures have become a beacon lighting the road for Iranian women in their struggle for freedom.