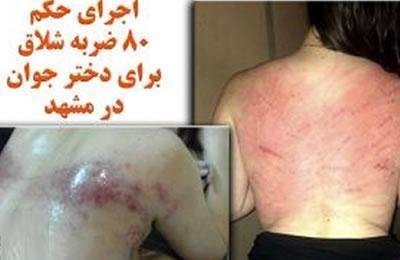 A 28-year-old woman was given 80 lashes of the whip for participating in her friend’s birthday party.

The young woman had the account of her arrest and flogging published in freelance media.

She was arrested in a birthday party two years ago in Mashhad and temporarily detained.

She said the security forces did not show any written warrants and the behavior of the female agents who gave her a body search was very offensive and humiliating. She was released on bail.

Two years later, she received her verdict and subsequently summoned to prison for its implementation. She was photographed, finger printed, shackled and handcuffed before being taken to a small room to be flogged 80 times.

The young woman asks where in the world people get flogged for taking part in a birthday party.

The report did not mention the date of arrest or the flogging.