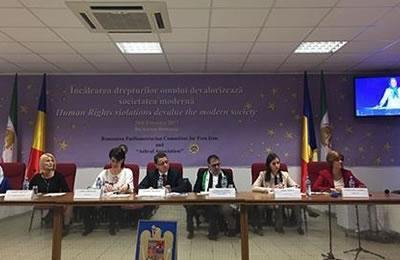 The International Women’s Day was observed by a conference in Bucharest, Romania, on Tuesday February 28, 2017, where participants paid tribute to the women of the Iranian Resistance.

The conferences was co-directed by Mr. Romeo Nicoara, Romanian MP and Chairman of Romanian Representatives Committee for a Free Iran, and Ms. Anda Abicolisi, President of Ashraf Association. A number of members of parliament, political personalities and human rights activists, Syrian opposition figures, and supporters of the Iranian Resistance and the People’s Mojahedin (PMOI/MEK) participated in the conference.

Speakers honored the International Women’s Day and elaborated on the clerical regime’s crimes in Iran, particularly the suppression of women and institutionalized discrimination against them. Participants and speakers declared support for the Iranian Resistance’s struggle and the 10-point plan of the Resistance’s President-elect Maryam Rajavi.

Mr. Romeo Nicoara opened the conference by honoring the International Women’s Day. He pointed to five decades of continuous fight for freedom and democracy by the PMOI and added, “Today, this fight is still going on in the context of a larger coalition named National Council of Resistance of Iran, presided by Mrs. Maryam Rajavi, and aims to realize the ten-point plan the contents of which are entirely consistent with international conventions on human rights.”

Ms. Maria Gercea, former Member of Parliament and women’s rights activist, also addressed the conference. In part of her speech, she said, “I am an advocate of women’s rights and this is the reason why I stand by the Iranian Resistance. What goes on in the Middle East against women’s rights must be stopped. The only thing is that we must not fear and we must remain united.

“For example, more than 3000 refugees were (stuck) in Camp Liberty, but with the continuous and effective efforts of the Iranian Resistance and its supporters as well as members of parliament, they succeeded in relocating to Europe…

“From here, I salute Mrs. Maryam Rajavi. I had to pleasure to meet her. She is a unique leader with wonderful energy and power and she is very impressive. I support her 10-point plan for the future Iran.”

Ms. Florika Korkesh, Romanian MP, saluted Mrs. Rajavi in her speech and added, “She is a strong woman, also very sensitive and careful. She can be a good model for all women of the world and she can be the most effective for motivating women in the positions of leadership particularly that she comes from a country which does not recognize women’s rights, at all.”

Another Romanian MP, Ms. Mara Marsh, made brief remarks declaring support for the Iranian Resistance. She said, “I know it is hard to fight for freedom, but I am pretty sure that you will prevail.”

Ms. Mara Marsh, deputy chair of the parliamentary Committee on the Equality of Men and Women, said, “The progress of any society passes through observation of women’s rights. Anywhere women’s rights are observed, the society moves towards progress. Any country that respects women’s rights, is democratic. And any country that restricts women is not democratic. Democracy is false claim in such countries. Our role in this committee is to show that women of Iran and Romania can play an equal role in every arena. I stand by you and I support your goals.”

Ms. Anda Abicolisi, a lawyer and President of Ashraf Association in Romania, also spoke at the conference. She addressed Iran’s discriminatory laws and how the Iranian women are denied having equal rights with men. In another part of her speech, she said, “I learned about the capabilities of Iranian women in leading an organized resistance, after I met members of the Iranian Resistance which is led by women.

“More than 3,000 members of this resistance were refugees in Iraq and lived in the city of Ashraf. They were transferred to Camp Liberty in 2012… The camp was located in a desert land and there were trailers which were half destroyed. These women and men, however, worked hard day and night and transformed Camp Liberty into a green and livable place by relying on their own determination despite minimum commodities in the camp. Camp Liberty was repeatedly attacked by rockets but they did not relent in their efforts and continued their construction. This is an inspiration for all of us, especially for the Syrians who live in Romania, to rebuild Syria after it is liberated.”

Maryam Rajavi: Women are the pivotal force of the Iranian Resistance