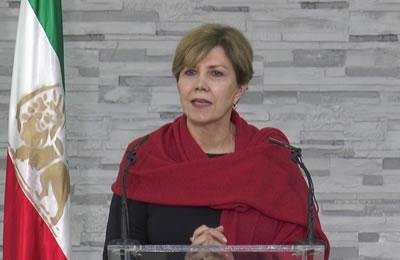 Thank you very much and thank you Madam Rajavi. I wish that I could pick you up and take you with me back to Washington.

The speech that you just gave, which outlined the roots of Islamic fundamentalism in Iran and its spread and its influence on the threat that many in the West see from Islamic terrorists, is something that needs to be listened to in the halls of power in Washington.

I feel –as I listened to Iveta talk earlier– that we are in a real crisis in the world, right now. What we are seeing is that fear is beginning to guide the way we determine policy, that the whole world order that emerged after World War II is, if not yet crumbling, at least beginning to show cracks.

And what I fear is that in response to the fear of the role of Islamic fundamentalism in the world and specifically in the West, we are beginning to throw up barriers and to build walls and to reject what are our democratic principles. And in my view you cannot be a freedom loving people if you do not want others to share in that freedom. And that every country such as my own that enjoys that freedom must welcome others seeking that freedom.

And what I see taking place now in the United States is very disturbing. An assumption that in order for America to be great we must find enemies and that we have to build barriers to keep those enemies out. And I see that’s particularly with respect to our Muslim community.

And I think this is very dangerous because it plays right into the hands of those in Iran, as you call them, the religious fascists. Because it does set up this clash of civilizations that is the worldview that the mullahs are promoting and that we in the West cannot fall into the trap of accepting that view.
That does not mean that we do not have the right to protect our borders. It does not mean that we do not have the right to ensure that the people who come into our countries are not there to do us harm. Every sovereign nation has those rights, but we cannot begin to demonize a people, to demonize a religion. We have to look at the reality that there is this ideology, this phenomenon of religious fascism that occurs in places like Iran and that Iran helps to export. But that cannot allow us to look at anyone who is a practitioner of Islam as our enemy.

And so I think we are at this very, very dangerous point. And I think to the degree that we in the West begin to play into the very game book that the mullahs have devised, it imperils us.

And so that, Madam Rajavi, is why I really wish that voices like yours could be heard. When I look at the principles that you have outlined for the protection of women, for the extension of freedom in the world, what I see are the very founding principles on which my country was founded. The rights of the individual, the right to be able to practice your own beliefs, the right to be able to decide for yourself what your future is. The right to be judged as an individual not based on the color of your skin or your religious beliefs or your sex. And that, I think, is an important message that needs to get a broader audience.
I am very thrilled to be here in Albania. Frankly, a year ago, if you had told me that I was going to be here with the people of Camp Liberty I would not have believed you. I would have thought this is a dream, this is a long time away and yet here we are.