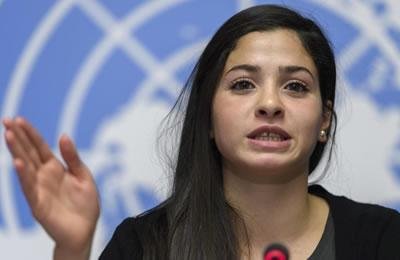 UNHCR, the UN Refugee Agency, announced the appointment of Syrian refugee and Olympic athlete Yusra Mardini as a Goodwill Ambassador.

Since her selection for the Rio 2016 Olympic Games, Mardini has worked closely with UNHCR, highlighting with her own inspiring performances the first-ever Refugee Olympic Team and the wider global refugee crisis.

She has become a powerful voice for the forcibly displaced across the world and a powerful example of their resilience and determination to rebuild lives and positively contribute to host communities.

At the UN General Assembly in September 2016, Mardini advocated for the rights of refugees to have access to safe shelter, education, livelihoods and training opportunities.

In January 2017 she represented UNHCR at the World Economic Forum in Davos, where she was the youngest participant. Addressing high profile audiences she stressed that, with the average length of exile now standing at 17 years, refugees need hope for their future and the one of their children, and not just a life in limbo. “With food for our stomachs, refugees can survive. But only if they are given food for the soul will they be able to thrive,” she said.

Over the past year Mardini has also advocated for the refugee cause during meetings with the Pope, President Obama as well as with royalty, influential business figures and other world leaders.

“There is no shame in being a refugee if we remember who we are. We are still the doctors, engineers, lawyers, teachers, students we were back at home. We are still the mothers and fathers, brothers and sisters. It was war and persecution that drove us from our homes in search of peace.  That is refugee. That is who I am. That is who we all are, that growing population of people without a country. I am a refugee and I’m proud to stand for peace, for decency and dignity for all those fleeing violence. Join me. Stand with us.”

Welcoming Yusra Mardini’s appointment as UNHCR’s Goodwill Ambassador, the UN High Commissioner for Refugees, Filippo Grandi said: “Yusra is a deeply inspiring young woman. Through her powerful personal story, Yusra represents the hopes, the fears and the incredible potential of the more than ten million young refugees around the globe,” he said.

IOC President Thomas Bach said: “The participation of Yusra and her fellow athletes of the Refugee Olympic Team at the Olympic Games Rio 2016 sent a message of hope to all refugees in the world. It demonstrated to a global public that refugees are our fellow human beings and are an enrichment to society. It is my hope that through her role as UNHCR Goodwill Ambassador, Yusra will continue to inspire refugees, reminding us that anyone can contribute to society through their talent, skills and strength of the human spirit.”

Accepting her new role, Yusra said: “I am thrilled to join the UNHCR family and eager to continue spreading the message that refugees are just normal people living through traumatic and devastating circumstances, who are capable of extraordinary things if only given a chance. The UN Refugee Agency does the most important and incredible work for refugees under extremely challenging circumstances, and I am proud to use my voice to support UNHCR.”