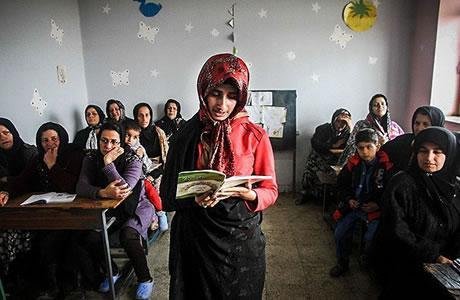 There are 1.8 million Iranian women between 10 and 49 years of age who are illiterate. Evidence indicate, however, that the actual number is much higher.

In an interview published by the state media, Ali Bagherzadeh, deputy Minister of Education and head of the Literacy Movement Organization, announced, “There are some 2.7 million illiterates between 10 and 49 years of age in Iran, nearly 1.8 million of whom are women.”

The official said there is an equal number of illiterates in Iranian cities and villages, however, the correlation of illiterate women in villages is higher than the cities. (The state-run ILNA news agency, March 31, 2018)

In some Iranian provinces, the per centage of illiteracy is over 30 per cent and a considerable number of children under 17 do not have the opportunity to continue their education. The parents of most of these children are illiterate, themselves, and there is a meaningful correlation between the level of education of parents and children who drop out of school.

The number of girls dropping out of school in western Khuzistan and other cities on the Iran-Iraq border is alarming.

The provinces of Sistan and Baluchistan, Khuzistan, West Azerbaijan and East Azerbaijan top the list with regards to illiteracy of girl children.

Poverty of families and not affording to pay for their children’s education, children’s participation in the family’s economic activities, cultural problems, seasonal immigrations, not having a registered birth certificate, are among the reasons children are deprived of going to school. These reasons are more acceptable among families when it gets to girls.

In some provinces, early marriages prevent girls from continuing their education and many families need their daughters to help them in earning the family’s income.

Mixed-gender high school classes are also among the reasons girls have to quit school in some regions.

According to a report published in 2015 by the presidential Directorate on Women and Family Affairs, the illiteracy of women and girls in Iran is alarming and the situation is critical in some 40 cities.