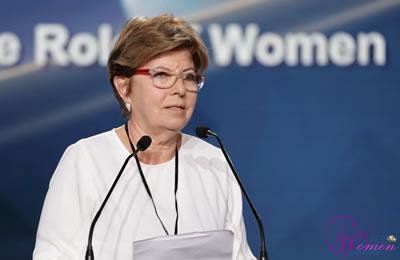 As President of the International Federation of Women in Legal Careers, I would like to express my thanks to this committee, and more personally, to Mrs. Rajavi, for this very special invitation to celebrate the International Women’s Day a few days in advance.

I would also like to thank all of the women of all ages who have taken to the streets to express their refusal of an abusive regime. Through their actions, they show that Iran desires a real change. This moves me that even when they are faced with threats, they do not back down from their fight for peace and freedom.

I wonder how the regime was able to oppress so many people without any repercussions.

This is due to impunity. For years, they have stolen the lives of hundreds of people. How can you express and explain the silence and inaction of the International Community like Argentina?

There’s so many parallels between the two countries during the last military dictatorship in Argentina. The regime assassinated a lot of youths, a lot of women.

In the beginning, it was a small protest in which we asked for more rights for the students. Many women were assassinated in the 1980s, after being tortured, in the same way as it is happening in Iran. In Argentina, many years went by before the people who were guilty had to answer for their crimes. It was one of the darkest times of the history of my country.

As a woman, as a lawyer, I focused on this like all of the massacres. I want justice to win.

I want Iranian women to hear that we are listening to their cries and that we also want the end of this perverse regime.

We know that the generations who are exerting the pressure physically, this generation of youths, have brought more fire to the flame of freedom.

The clock is counting down for the regime.

I want to tell the Iranian Resistance that I am here to express my solidarity, to fight against this misogynistic regime.

As women of the Federation of Women in Legal Careers, we support your fight.

Thank you Mrs. Rajavi for your courage and your determination. Iran is on its way to peace.

We will be your voice in legal institutions - Maria Candida Almeida