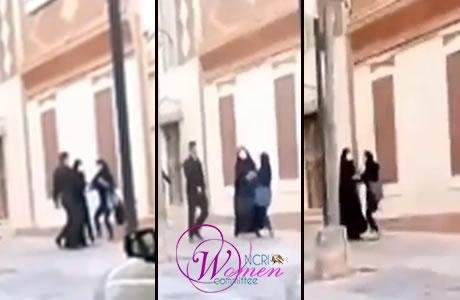 Once again, an amateur camera registered the scene of the State Security Force and Guidance Patrol’s savage treatment of Iran’s women on the streets.

The Guidance Patrol stopped a young woman on Tehran’s Baradaran-e Mozaffar Street in Tehran and violently forced her into the partol’s van while she was demanding them to let her go.

Two weeks ago, the news of the Moral Security Police’s brutalizing of several young women, including an ailing woman, in a park in Tehran broke out, causing tremendous outrage among the public in Iran and the world.

Maryam Rajavi, President-elect of the National Council of Resistance of Iran, strongly condemned the brutality and savagery saying it once again revealed the ugly, inhuman and anti-Islamic visage of the misogynous mullahs ruling Iran.

She called on Iran’s courageous youths to counter and confront such disrespect and violation of Iranian women’s dignity by the clerical regime’s revolutionary guards and mercenaries and do not allow their sisters to be insulted, suppressed and tortured.

Iran: Women protest ban on their entry to stadium in Qa’emshahr