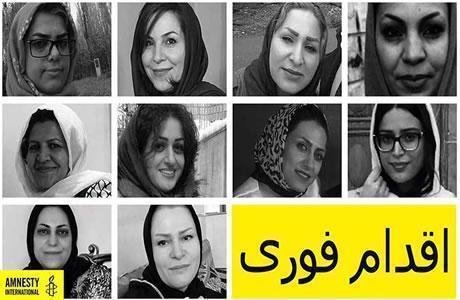 “Women prisoners of conscience from Iran’s Gonabadi Dervish religious community are being subjected to verbal abuse, including sexual slurs, and denied proper medical treatment by doctors and other health professionals at Shahr-e Rey prison on the outskirts of Tehran,” Amnesty International said in a statement issued on May 25, 2018.

AI has received testimonies indicating that doctors at the prison, a former industrial chicken farm in Varamin, are routinely dismissing the women’s complaints of pain and discomfort as “fake” while refusing to prescribe them medication on a timely basis or carry out thorough diagnostic tests. They are also failing to ensure that medical equipment in the prison clinic is functioning properly and poses no threat to patients’ health.

Philip Luther, Amnesty International’s Research and Advocacy Director for the Middle East and North Africa, asserted, “Deliberately denying medical treatment to any prisoner is unlawful, cruel and inhuman and can amount to torture. These women from Iran’s Gonabadi Dervish community should not even be imprisoned in the first place. It is deplorable that the Iranian authorities are seeking to intimidate and torment them further.”

Amnesty International pointed out that “any prison staff suspected of abusing or withholding medical treatment from detainees must be investigated and prosecuted in trials that meet international standards.”

At least 10 women from Iran’s Gonabadi Dervish community have been arbitrarily detained in Shahr-e Rey prison in inhuman conditions, without access to their lawyers, since February 2018.

These women have suffered a range of health problems in custody, due to ill-treatment by security forces, including head injuries, broken arms and vaginal bleeding. They also have been denied adequate treatment for pre-existing medical conditions such as asthma, diabetes and high blood pressure.

AI statement reads in another part, “According to reports received by Amnesty International, the women have been subjected to hostile interrogation-style questions about their court cases and insults over their beliefs by doctors at Shahr-e Ray prison. There are concerns that doctors have also sought to degrade the women by exploiting cultural taboos around sexuality, asking the women intrusive questions about their sexual relations, such as whether they have “boyfriends” or are “sleeping around with men.”

Amnesty International cited a source saying that women requesting emergency medical care in the evening or at night have been refused treatment by doctors and nurses until the following day and even berated for purportedly disturbing the medical staff’s sleep in the middle of the night.

There are concerns about the reliability of medical equipment at the prison clinic, as, during the last three months, it has shown prisoners as having normal blood pressure even when they were experiencing symptoms of high blood pressure, including severe headaches, vision problems, chest pain, difficulty breathing and an irregular heartbeat. High blood pressure exposes people to the risk of stroke and heart disease.

Detainees also said a lack of stretchers and wheelchairs has resulted in fellow detainees being forced to carry sick prisoners out of their rooms and into the clinic, which has led to falls and other accidents.

Amnesty International also noted reports that in a further deliberate attempt to abuse and degrade the prisoners, the Gonabadi Dervish women have also been forced to pick weeds in the prison yard with their bare hands as a condition for being permitted telephone calls with their families and a couple of hours of fresh air during the day.

Iran: Women partake in protests in Tehran, south and east of Iran