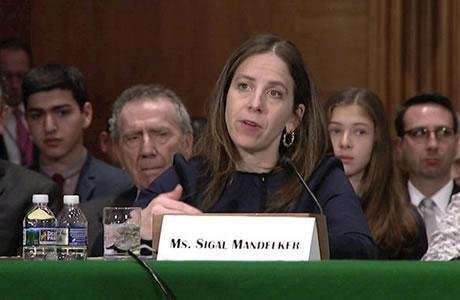 US official says state-backed group behind acid attacks on women

Ansar-e Hezbollah has been behind acid attacks on women in Isfahan (central Iran), said an undersecretary of the U.S. Treasury Department.

Sigal Mandelker, the Under Secretary for Terrorism and Financial Intelligence at the U.S. Treasury Department, was cited by USAdarFarsi (the U.S. State Department’s Facebook in Farsi) on June 7, 2018, as saying this.

Ms. Mandelker said those who were contemplating trade with Iran must understand that the regime not only foments violence in the Middle East through terrorism and other destabilizing activities, but it also does not care about its own people through gross violations of human rights against women, political dissidents and others.

She said, for example, the Ansar-e Hezbollah which is a state-backed institute attacks and persecutes the Iranian people and has been linked to the acid attacks against women in Isfahan. They splashed acid on numerous women whose clothing did not comply with the regime’s standards, seriously injuring them and creating an atmosphere of fear. (USAdarFarsi, June 7, 2018)

In October 2014, a wave of acid attacks was carried out against women in Tehran and Isfahan after incitement by Friday prayer leaders and took toll on dozens of women.